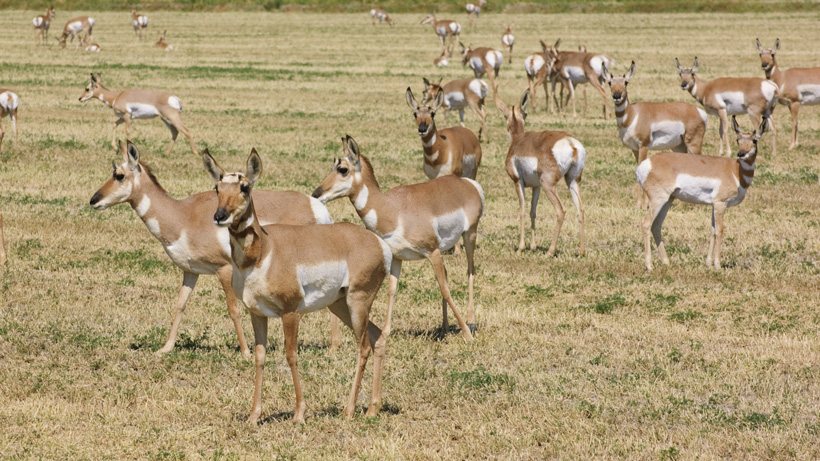 This week, nearly 100 antelope were successfully released on the Colville Indian Reservation in Washington in an effort to return the animals to their native territory. The relocation was a collaborative effort between the Colville Tribes and the Nevada Department of Wildlife (NDOW). It is the second time pronghorn have been released on tribal land since January 2016.

“We captured 12 males and 87 females from Nevada,” said Eric Krausz, wildlife biologist for the Colville Tribes Fish and Wildlife (CTFW) program, in a press release. “The total composition included 26 fawns, 20 yearlings, and 53 female adults. We lost one female antelope due to injury.”

CTFW put GPS/VHF collars on 50 adult female pronghorn to track their location and monitor mortalities. The collars should last for about four years. The capture occurred near Elko, Nevada. Biologists used net guns and helicopters to catch the animals before transporting them by horse trailer to their new location, according to The Star. This relocation effort is nearly double the number of pronghorn captured and relocated in January 2016. During that transfer, only 52 pronghorn were released into the reservation wilderness.

“Our interest in targeting these animals was due to the loss of critical winter range caused by wildfires in Nevada during 2017,” Cody McKee, big game biologist for NDOW, told The Star. “Our objective was to reduce densities of pronghorn in these areas, and allow for those being transported to Colville lands time to acclimate to their new environment before the arrival of winter. We are optimistic that the pronghorn that remain in Nevada will have less competition for food on degraded winter range.”

The Bureau of Indian Affairs paid for the relocation.