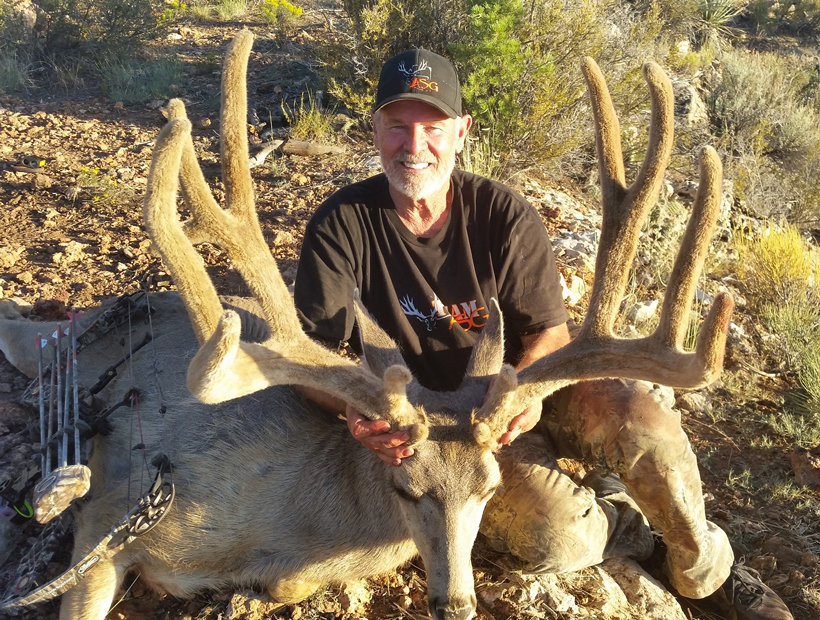 Congratulations to Arizona bowhunter John McClendon on a perfect 25-yard shot on a buck that may hold the new World Record for typical mule deer. McClendon’s mule deer has an initial entry score of 207 5/8" which could beat the current record that stands at 205 0/8".

McClendon, a veteran bowhunter from Mohave County, Arizona, used patience to observe and track this buck on many occasions, knowing the buck’s home range was particularly thick cover – “as thick as dog hair.” He decided to hunt the buck over a waterhole, patiently waiting out several days of rain until he would have the perfect opportunity for a clean shot.

In McClendon’s case, patience paid off.

According to Pope & Young, McClendon’s mule deer is entered into the current, ongoing 29th Recording Period, with entries accepted into the P&Y Records Program from January 1, 2013 to December 31, 2014. The final score of McClendon’s mule deer is subject to Panel Judging verification, which could change the final accepted score for a variety of reasons, including unusual shrinkage or initial mis-measurement.

At the end of every two-year biennial recording period, awards and honorable mentions are given to the most outstanding animals in each species category that have been entered during the recording period. New World Records are verified, proclaimed and awarded during P&Y’s biennial convention and awards banquet.

P&Y maintains the universally recognized repository for records and statistics on North American big game animals harvested with a bow and arrow, and considers scoring seriously. A hand-picked team of knowledgeable and experienced measurers gather to verify the final scores of antlers, horns and skulls entered during the two-year recording period.