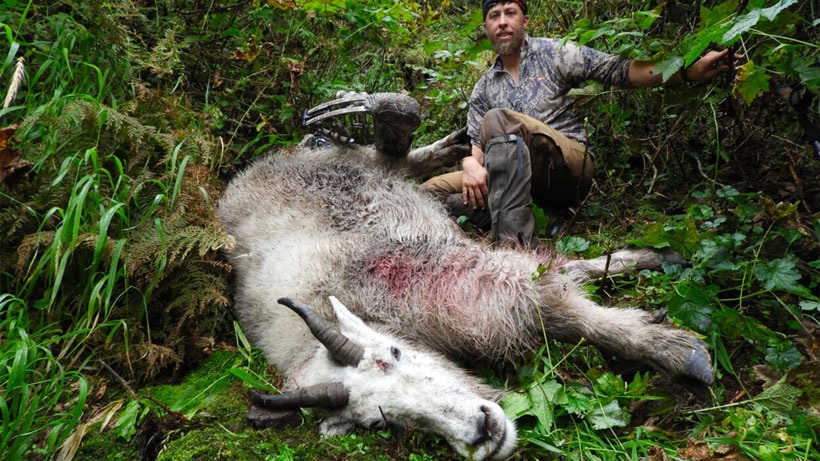 Congratulations to Kaleb Baird who now holds the new world record for Rocky Mountain goat in North America. Earlier this month, the Pope and Young Club (P&Y) brought together a special panel of judges to officially score the billy, which was shot with a bow on Sept. 11, 2020 in southeast Alaska.

Baird found the record breaking mountain goat on the fourth day of his hunt during what he said was “the best stretch of weather we had for the entire year,” according to a P&Y press release. He battled a crazy work schedule and 2020’s travel complications, resulting in the solo hunt during the second week of September.

“Leading up to this hunt I’d known there was the potential for a truly special billy. I joked with some friends over the summer that the plan was to take a record goat in hopes of enticing a hunting partner,” said Baird.

“I thought I’d lost him for the day,” said Baird. “One last pass through his previous hangout and I stumbled right into him and a smaller partner. He stood for a great 31-yard shot, but managed to make the edge of the mountain and drop into a nasty avalanche chute for his final dash.

“When I finally got to him his right horn was buried in some gravel and I thought it was shattered. Lifting up his head I could see he’d only chipped about an inch and, while not an expert, I could tell his left horn was absolutely world class.”

“Congratulations to Kaleb Baird on his very special Rocky Mountain goat and the Pope and Young Club’s new world record. The previous record was declared on Feb. 15, 2020, less than a year ago. This was also the third Rocky Mountain goat meeting the criteria to go through a special panel in the last 12 1/2 months,” said Eli Randall, P&Y Director of Records.