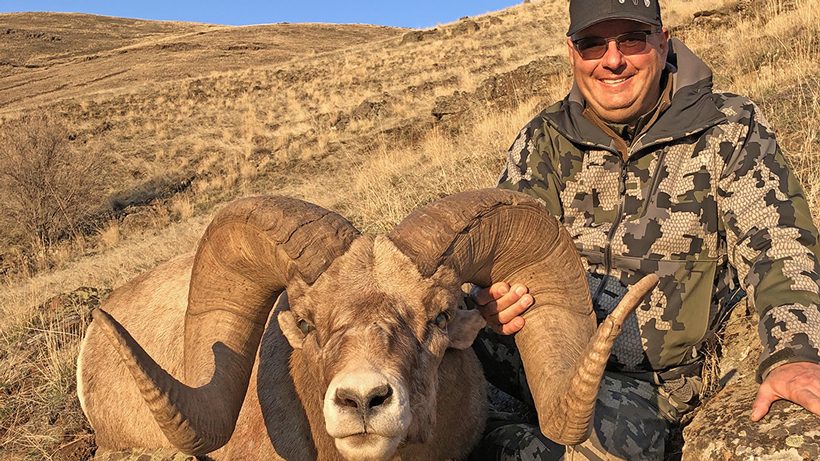 Congratulations to Gary Guerrieri on his record bighorn sheep. The Pennsylvania hunter harvested a new Boone & Crockett record during his 2020 hunt in Asotin County, Washington. The ram’s entry score is 202 4/8”, which makes the record ram the 21st largest bighorn sheep to enter into B&C’s Records Program, according to a press release.

For Guerrieri, his passion for bighorn sheep hunting started on his 50th birthday 11 years ago.

“I guess some of us love the mountains, and, to me, the sheep there are as special as they come,” said Guerrieri, who grew up hunting whitetails in Pennsylvania. “Once I started sheep hunting, it turned me topsy turvy. Just seeing them, and then figuring out how to get to them is not very easy. It’s very emotional.”

In 2012, he harvested a Dall’s sheep in the uppermost region of the Northwest Territories followed by a Stone’s sheep in 2013. But apparently, Guerrieri was still just getting started. In 2015, he killed a desert ram in October and a bighorn sheep in November – all four of his rams put him in the 700 club. As only the second person to achieve membership into this coveted club with his first four rams, Guerrieri said, “I tell everyone that I have been blessed by the sheep gods.”

Every year, Guerrieri buys several bighorn sheep raffle tickets, figuring if he doesn’t win, then at least he’s “investing in the sheep herds in the West, in conservation.” However, in 2020, he drew a tag for a unit in Asotin County, which is located in southeastern Washington. While he’s been there before – taking rams in both 2015 and 2016 – he still needed to prepare: both mentally and physically. Terrain in this area, while great for bighorn sheep, can be tough on those not prepared to handle it.

Guerrieri and his guides, Glen Landrus and Bryan Bailey of Bailey & Landrus Hunting Company, took him out to glass each day. After a week, they found the perfect ram, which Guerrieri shot with his McWhorter 7mm STW. The result? A new Washington State record.