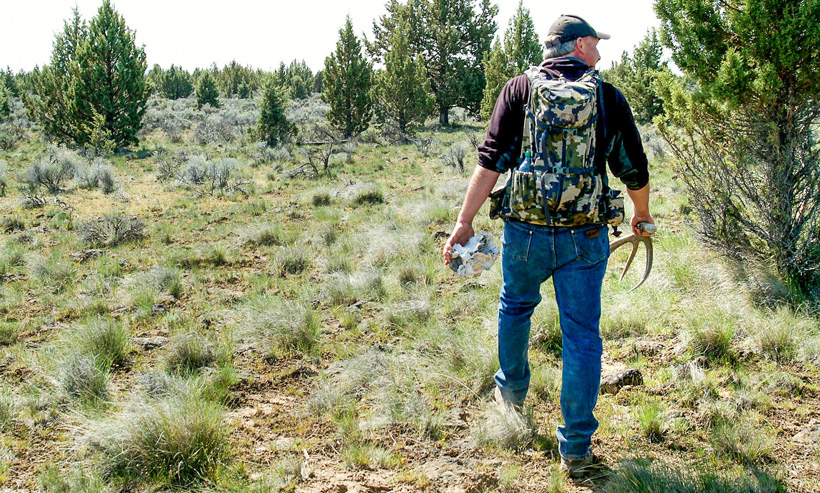 Shed hunting is a hobby that many hunters participate in. Once deer or elk season is over, it is another excuse to get outside and explore the backcountry in hopes of coming home with a shed or two – a souvenir from a long hike in the mountains during a crisp day.

But sheds are also considered big business, especially when it comes to décor and furniture design. This means that there are a lot of shed hunters obtaining the antlers illegally, causing stress among elk and deer, according to WUNC.org. Organizations like Oregon Shed Hunters and Eyes In The Woods (EITW) are attempting to monitor the conduct of those who shed hunt and promote the ethics behind the tradition.

"It's kind of suspicious when you see somebody coming out with 10 or 12 antlers at 9 o'clock in the morning," says EITW co-founder Kyle Winton, especially when the area just opened up to shed hunting that morning. EITW is a volunteer group that helps “law enforcement catch people lured by the potentially big pay day,” according to WUNC.org. The group uses trail cameras to help spot those who may be lurking in Central Washington’s Oak Creek Wildlife Area illegally obtaining sheds. The night before the winter range opens to the public, Winton and his volunteers check the preserve in search of poachers.

Waiting for the antlers to fall naturally is what an ethical shed hunter does. For those who are after them for profit – and trophy racks can sell for up to $35 per pound – shed poachers will often harass or even kill deer and elk in order to collect their antlers. Four people have been convicted so far of illegal shed collecting.

"People are running these elk while they're really in poor condition physically," says Richard Mann, a wildlife enforcement captain for Washington State. "[the antlers] may not drop dead on site, but some of them do, and once they get off, they never recover from that kind of stress."