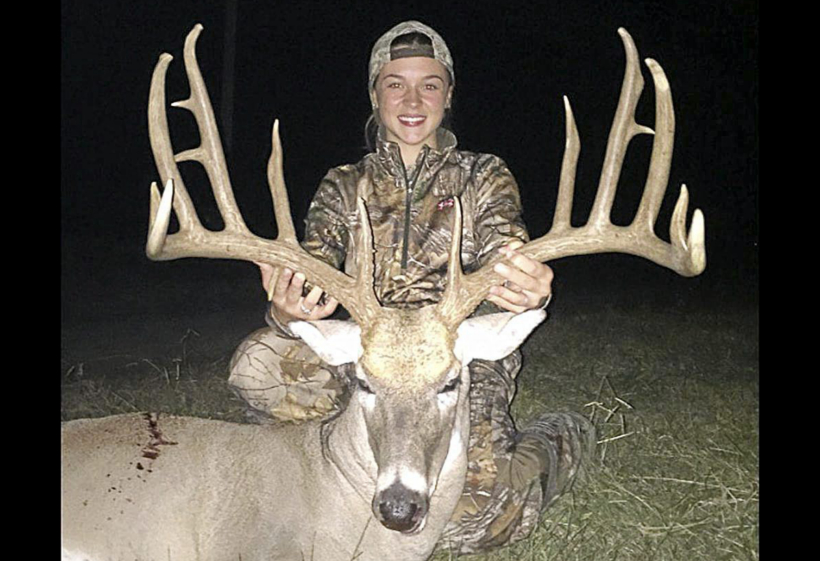 The annual McIntosh County, Oklahoma youth hunt is a fun family tradition that Micalah Millard has been participating in for years with her dad. This year’s hunt ended a little differently than years past when Millard harvested one of the state’s largest bucks ever, becoming the first Oklahoma female to ever kill such a large typical whitetail deer. According to the 14-year-old, luck must have been on her side since the buck had never been seen before that day and surprised both her and her dad as the two hunted on her family’s ranch last weekend.

The two set up a stand in an area that’s rarely hunted on the property after her dad checked the trail camera positioned there, finding photos of a giant buck never seen before. Patiently, the two hunted from the stand that afternoon, excited to spot that buck hours later trailing several does.

Millard’s dad became incredibly excited at the possibility of the gigantic buck. “He was as close to yelling as you can get in a whisper. He was that excited,” Millard told Newson6.com. “I guess I didn't really get that excited because I thought I was gonna miss, maybe?”

But Millard didn’t miss, shooting the 12-point buck twice at 125 yards in a clear broadside shot, hitting the deer in the vitals and through the base of the neck. According to TulsaWorld, the buck’s antlers green-scored at 187 1/8 inches and has a “12-point mainframe rack with a 24-inch inside spread and relatively few imperfections.” Based on the current state records, Millard’s buck will most likely come in at No. 4. Oklahoma’s largest typical whitetail measures 194” and was harvested in 2007. Regardless, Millard is the first female to join the ranks of such successful hunters within the state.

Not only does Millard have the satisfaction of harvesting such a record buck at such a young age, but she also has the added bonus of having accomplished this with her dad by her side. That is one of the most amazing hunting memories – and stories – that anyone can have.