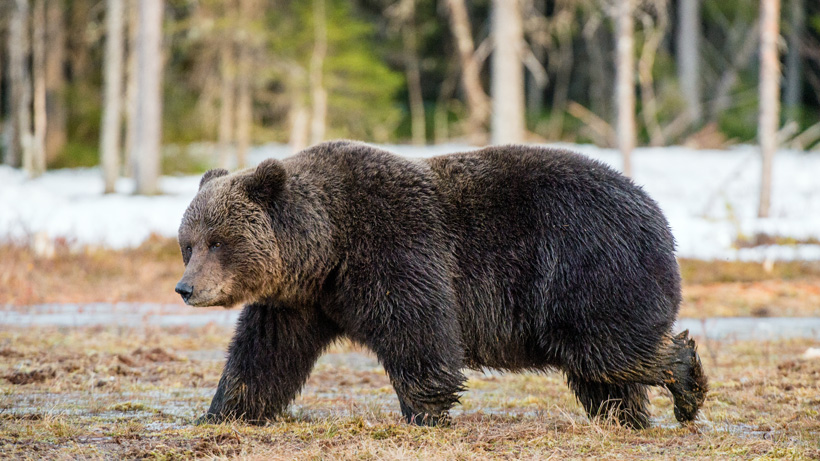 An influx in inexperienced outdoorsmen and women is becoming a new challenge for grizzly bear managers thanks to COVID-19. With little to do indoors and the need to adhere to social distancing requirements, over the past summer, Montana experienced an increase in backcountry visitors looking for an outdoorsy escape. Earlier this week, members of the Northern Continental Divide Ecosystem subcommittee of the Interagency Grizzly Bear Committee, which is comprised of land managers and local biologists, discussed the surge in out-of-state visitors and how to handle it for the future, the Missoula Current reports.

“At Glacier National Park, there was a huge COVID effect,” said Glacier National Park (GNP) superintendent Jeff Mow. “Not only is it a large number of visitors who’d never been on public lands before and therefore didn’t know how to behave with some very basic skills like taking care of garbage, burying human waste, dogs, all those public use issues.”

While there were luckily no human-bear conflicts within the park, GNP bear specialist John Waller said that they did close the park “repeatedly” at Logan Pass and the Hidden Lake Overlook “due to a grizzly intent on hunting mountain goats.” Waller was also concerned over bears becoming “habituated” and “aggressive” with casual dumpster etiquette from tourists who didn’t properly close lids or secure trash.

On the eastern side of the park, it wasn’t quite as bad since the Blackfeet Nation closed their reservation to nonresidents; however, that also resulted in fewer fishing license sales, meaning that the tribal wildlife department “took a hit,” according to the Missoula Current. Further, the state is currently working on improving Highway 89, which worries Blackfeet biologist Buzz Cobell.

“The road is upgraded, so speeds will increase,” said Cobell. “I think there’s going to be more mortality.”

In fact, the majority of grizzly bear deaths are due to vehicle collisions, site-related incidents (like getting into chicken coops or dumpsters) and shooting-related (poaching or landowner issues). So far this year, there has been roughly 44 bear killed for depredations plus an additional five grizzlies found dead; their deaths are under investigation, according to the Missoula Current.

Going forward, the plan is to roll out tourist education so that people are more bear aware as they head into grizzly bear country, especially since the number of visitors to the area will likely stay the same next summer.

“Reducing bear conflicts would be a huge focus for us,” said Mow. “’Recreate responsibly’ is a messaging platform we’re hoping to tee up and see how grizzly bears and all that works into that idea of what you would almost call ‘Leave No Trace 2.0.’ Or maybe it’s a ‘0.5,’ because it has to go back to some very basic points of ‘Leave No Trace.’”