Nun with a gun 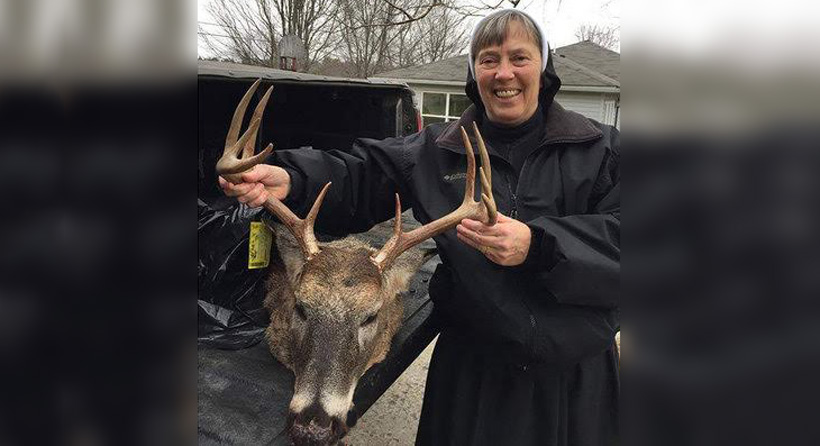 On Nov. 30, Sister John Paul Bauer headed out to test her luck on the first day of rifle season in northwestern Pennsylvania. As she sat in her tree stand, watching the forest floor, she said the rosary as deer began to appear and she was able to kill a buck. Like any proud hunter, she posed for a photo with the 10-point buck and her Diocese posted the photo to facebook along with her hunting story.

"After I realized I got the deer, I thanked God," says Sister Bauer.

And while many of the comments were positive – she did live and work as a high school teacher in the middle of deer and elk hunting country – once anti-hunters and animal activists got wind of the post, the comments became negative and vulgar.

“Was your God not clear when he said, ‘Thou shalt not kill?'” wrote Daniel Cunningham as the post quickly topped over a million views.

The negative attention surprised Sister Bauer as the St. Mary’s community is one that embraces hunting. She has been hunting for 15 years and has harvested three bucks and a bear. She learned to shoot when she was in the Navy.

Regardless, social media is a powerful tool that many anti-hunting and animal rights groups use to their benefit. The Erie Diocese decided to remove the post based on the negativity surrounding what should have been celebrated instead.

"We recognize that social media needs to be a two-way conversation, but unfortunately, many of those who oppose hunting posted vulgar comments, using profanity and even an obscene photograph," says Marie Welsh, spokesperson for the Erie Diocese. "After careful consideration, we decided to delete the post due to its inflammatory nature."

Sister Bauer won’t let a few comments stop her from hunting. She told the Associated Press that she “views hunting as a spiritual endeavor and also a form of conservation.” She had the buck processed into sausage and steaks to share with two families and took the 16” rack to a taxidermist for mounting.

And as for those who may question her choice of prayers while sitting in her tree stand, Sister Bauer says, “I’ve always prayed the Rosary on the tree stand. That’s a tradition. You get up in the morning. You pray the Rosary in the tree stand. So, I just think the Blessed Mother did smile upon me.”