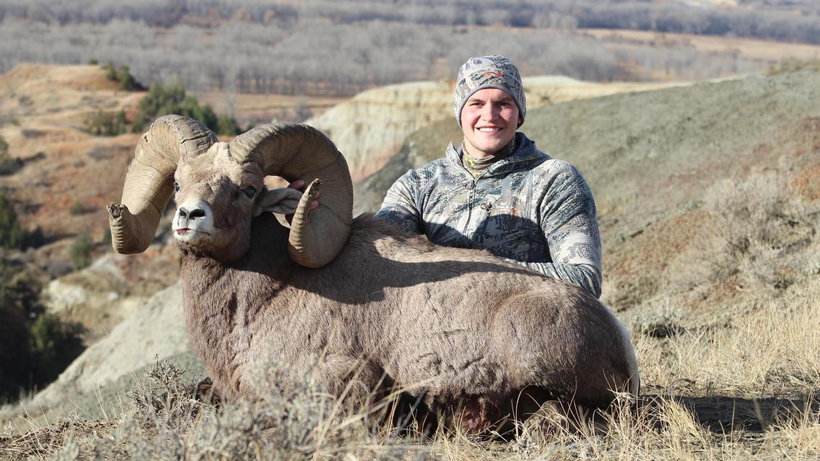 Weeks of scouting paid off for David Suda, who harvested a record breaking bighorn sheep in North Dakota within half an hour of opening day. Only one of five residents to draw the once-in-a-lifetime tag out of about 17,000 applicants, Suda shot his trophy ram on the morning of Friday, Oct. 30, The Dickinson Press reports.

“I was very lucky,” said Suda. “I’d go out for about four-day weekends and scout the weekends and then come home. Within a six-week timeframe, I was out there probably four or five days every week. I spent a lot of time out there before the season.”

While Suda’s ram is currently within the mandatory 60-day drying period, its green score is 190”, which surpasses the previous state record of 179”, according to Brett Wiedmann, a big game biologist with the North Dakota Game and Fish Department.

“That’s a mega-ram there,” said Wiedmann. “That ram is nice anywhere in North America. It’s the real deal.”

The official score of the seven-year-old ram should be released within the next few weeks.

“I knew about this ram, and I had no doubts he’d be the state record, but he was bigger than I thought,” said Wiedmann. “I had him in the low 180s, and we taped him out, and it netted almost 190. And of course, when we officially score him, sometimes they even get a little bigger.

“To have a ram that big is a lot of fun. They were pretty pumped.”

Suda, who hunted Unit B4, spotted the ram during his first scouting trip in mid-September, according to The Dickinson Press.

The ram was “substantially bigger than anything else we saw,” said Suda. “There wasn’t even anything in the same ballpark as him. When he would walk out, you could just tell — he was a stud.

“It was amazing watching him.”

Suda gained permission from three different ranchers near his unit so he could use their land to find the ram again, but the ram managed to evade the scouting party, sticking to one “specific ranch the whole time.” They soon discovered it had traveled to a ranch farther south. It took three days to find him again.

Opening morning, Suda was ready and ended up shooting the ram in an area dubbed “Sheep Canyon,” according to The Dickinson Press.

“It happened fast,” said Suda. “I was looking at a ram in the crosshairs right away and went, ‘It’s not him,’ and we kept moving. I went to one side (of a butte) and my buddy went to the other, and he started yelling my name. He asked me if that was him and I said, ‘I don't’ know what you’re talking about, I can’t see him.’ He said, ‘Look down.’

Suda also managed to draw a mule deer tag for the Badlands after trying for the past eight years. He harvested a 170” mule deer buck only a week after shooting his record-breaking ram, according to The Dickinson Press.

“Honestly, the hunt was a dream come true — everything worked out,” said Suda. “I got the ram I wanted, we worked really hard prior to the season, and we put a lot of time in. I had two young guys that are big hunters and also two of my best friends with me, and to do it with your friends and have your parents with, it’s something you don't ever think will happen. Honestly, it was just unbelievable — it was 110% unbelievable.

“I still can’t believe it,” Suda added. “I look at that ram every day; and I probably will for the rest of my life.”