No packgoats allowed in Denali 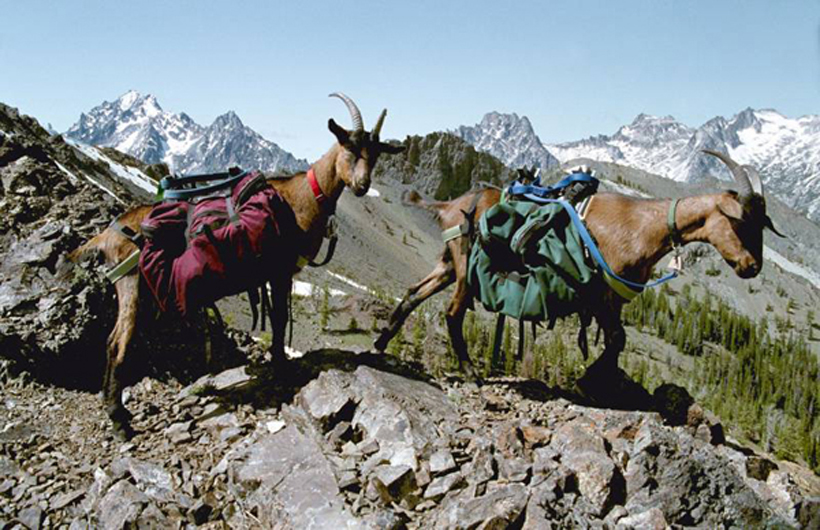 Wildlife officials are planning to place a temporary ban on goats in Denali National Park to prevent the possible spread of disease to wild sheep.

The plan comes after local resident, Corey Furrow, was cited for hiking in an area of Denali where all pets are restricted. Since the park service doesn’t specifically define pets by individual species, goats are technically treated the same as a dog under the rule. And while walking pet goats in the park may not be a particularly common activity, using goats as pack animals is.

Alaska has not yet experienced the use of pack animals other than horses. Officials thus believe that a proactive and precautionary approach must be taken to avoid the introduction and establishment of many serious diseases that are often carried by livestock like domestic goats, cattle and llamas.

“These animals can carry diseases that are easily transmissible to wild sheep and goats, as well as other wildlife,” says Steve Arthur, Chief Wildlife Biologist for Denali National Park and Preserve.

The park’s Dall sheep are particularly vulnerable to diseases and parasites carried by domestic livestock because they have not had previous exposure.

“It’s kind of a situation like when European settlers first came to North America, and they transmitted things like the flu and the common cold to Native Americans,” says Arthur. “Apparently healthy goats can transmit diseases to wild sheep, and it can be devastating.”

The biggest disease concern is bacteria that causes pneumonia in the wild sheep.

Pneumonia, a respiratory disease, has proven to be a major cause of mortality and reduced reproduction in bighorn sheep populations across western North America.

“There was probably a dozen different isolated outbreaks that lost up to 50% of the population,” said Arthur. “Other places, over the last twenty years or so, have seen perhaps 80 to 90% of their sheep lost in a single outbreak.”

To prevent such outbreaks, wildlife managers throughout the country have increased efforts to establish and maintain separation between bighorn sheep and domestic animals, including goats.

In 2011, the Shoshone National Forest placed a temporary ban on pack goats in nearly all of the forest. Officials extended the temporary closure until 2015 and are currently in the process of formalizing the ban.

This past spring, three national forests that comprise the Blue Mountain region of Oregon are under the discussion of a new Forest Service plan that will address the use of pack goats.

The ban that is currently being discussed for Denali National Park is temporary. Making the ban permanent would require additional federal processing. Park Superintendent Don Striker told the Fairbanks Daily News-Miner that he plans to start that process next spring.

“Not that I’m expecting there to be this huge influx all of a sudden of people wanting to walk their goats,” Striker told the Fairbanks Daily News-Miner. “But, sort of, do people realize this is a highly, highly, highly risky proposition for our Dall sheep?”

While the vast majority understands and appreciates the threat of disease, the ban on goats has drawn controversy. Many goat packers maintain that the odds of a domestic pack goat transmitting deadly bacteria to a bighorn sheep is very slim and a ban is rather excessive. Others, like biologist John Mionczynski, say that it may only take one chance encounter to debilitate an already struggling sheep population.

Yet even Mionczynski doesn’t want to see a permanent ban placed on goats. He has spent a number of years researching bighorn sheep with the University of Wyoming, and believes that it is entirely possible to someday create a vaccine for the wild sheep. Vaccines have been used in wild sheep since the ‘70s, distributed to the herds by apple pulp.

“I’m in that unique position of having the access to all of the literature. I could see where somebody might want to come to a different conclusion, because it’s so up in the air,” Mionczynski said. “I prefer to err on the side of the bighorn sheep. Even if it’s one in a million that sheep could be infected by what goats are carrying, I would like to see a temporary ban.”

Many of those in the goat packing community believe that they can mitigate the risk of spreading disease. They would like wildlife officials to consider some of the regulations that goat packers could implement, including keeping the goats on leads, using GPS collars to keep track of the goats at all times and only moving through occupied bighorn sheep habitat during the day.

Goat packers would also need to be certified in best management practices to ensure the highest level of regard for the rules.