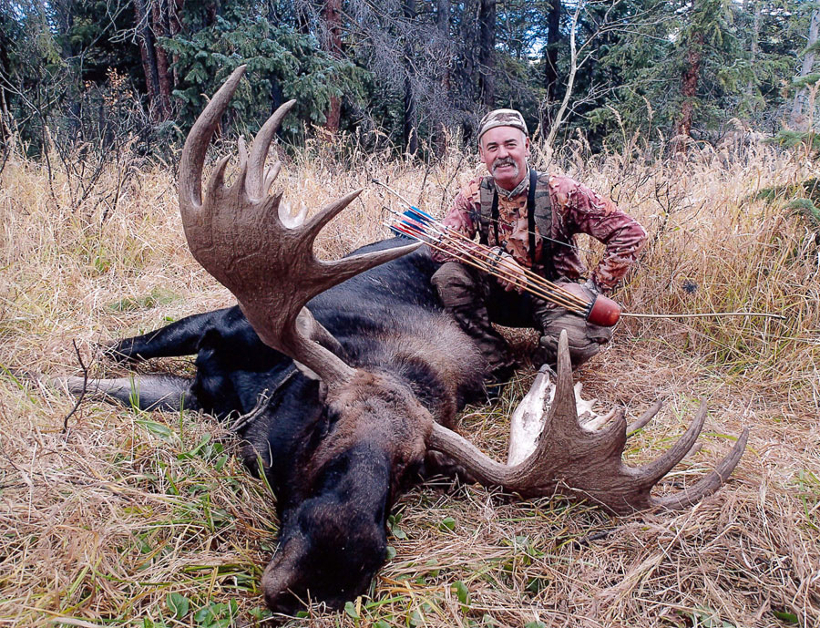 It was a lucky day when Bobby Hebert of Golden, Colorado, shot a world record Shiras moose from only nine yards away. The hunt came after hours of patience and practice, ending with Hebert’s harvest of a moose scoring 8 2/8” higher than the current world record. Oct. 8, 2015 will be a day that Hebert will remember forever after he took a 194" bull.

“We were making our way around to where I had been calling the night before, when my hunting partner, Mike told me to stop,” Bobby Hebert told officials with The Pope & Young Club (P&Y). “He thought he could see a moose in the trees ahead. I slowly raised my binoculars to find it was the bull we had named, Yukon Jack.”

Hebert’s luck held out as the moose seemed to walk in his direction, making the nine yard shot one of pure tension and adrenaline. Hebert aimed, shooting an arrow that connected with his target, which fell over about 40 yards away. Yet, when he and his hunting buddy, Mike, relocated the bull, they found him standing, disappearing into trees before Hebert could nock another arrow. Fortunately, the duo stumbled upon him again only 20 yards into the dense forest. Hebert shot another arrow, finishing off the bull at 35 yards.

“I literally shed tears of reverence and joy, giving thanks to the Man upstairs. I am incredibly grateful to have taken part in this once-in-a-lifetime hunt,” says Hebert.

This isn’t any Shiras moose bull. Hebert’s bull is currently being considered as a new world record by scorers with P&Y.  His moose is entered into the ongoing 30th recording period, which runs Jan. 1, 2015 through Dec. 31, 2016. The current world record for Shiras moose is held by Richard E. Jones. Jones harvested a 185 6/8” bull in Sheridan County, Wyoming in 1987.

Congratulations, Bobby Hebert, on such a fantastic harvest!