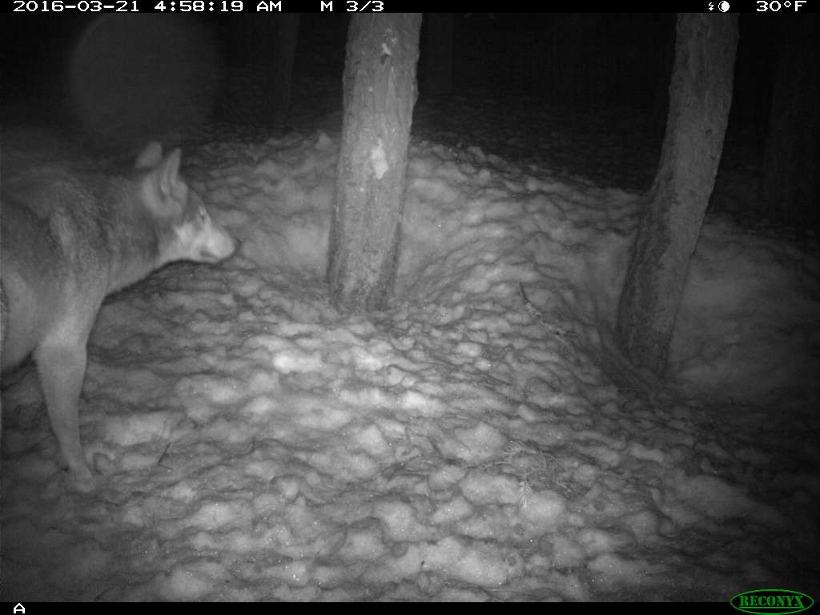 There’s a new wolf in town—or at least that’s what California wildlife biologists think after a trail camera in Lassen County snapped several pictures of what appears to be a gray wolf. The recent photos have California Department of Fish and Wildlife (CDFW) biologists scrambling to confirm that the animal is, in fact, a wolf and not a wolf-dog hybrid or even someone’s pet.

While a DNA test has been conducted on a fur sample found near the area, the quality of the sample provided inconclusive results. This means that CDFW biologists will continue to try to gather evidence of the wolf’s presence (scat, fur, etc.) while others analyze the frequency of the animal’s visits to the area in western Lassen County where the trail camera is set up.

“When you look at the time between when we’re getting images, there’s some gaps there,” says Karen Kovacs, who is a CDFW wildlife program manager. “Where is it going? How far is it going? Those are unknown.”

According to The Sacramento Bee, based upon the wolf’s fur color, CDFW doesn’t believe the animal is a member of the Shasta Pack – and it is definitely not OR25, the male wolf from Oregon that sometimes roams into the northern part of California. OR25 wears a GPS collar, which makes him easy to track. Yet, biologists note that the whereabouts of the Shasta Pack is currently unknown; members left the area once heavy snow hit in search of food.

“Where they went is unknown,” says Kovacs. “All we can try to do is monitor the site that they were at last year and continue to inquire from the public about what they see, where they see it and when they see it.”

But without the Shasta Pack marking their territory, could a new wolf have staked its claim? Only time will tell as researchers continue to gather evidence and monitor trail cameras in an attempt to confirm that California may be the new destination for wolves.