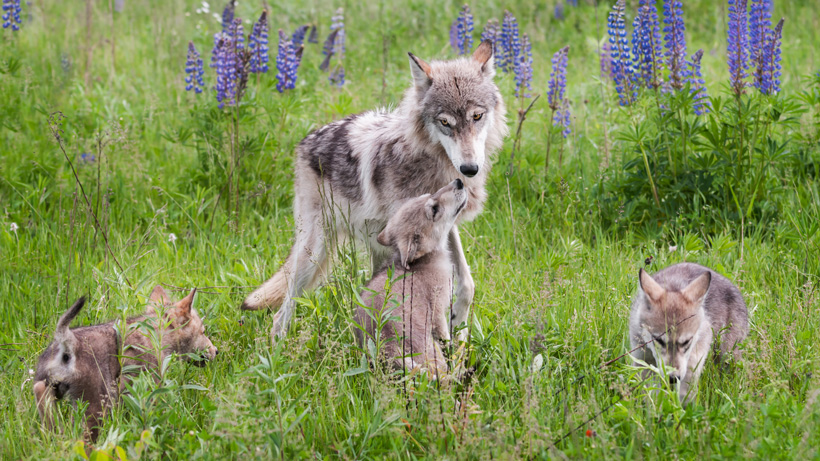 Last week, the California Department of Fish and Wildlife (CDFW) confirmed the presence of the state’s second gray wolf pack in Northern California. Dubbed the Lassen Pack thanks to the wolves’ propensity for roaming western Lassen County, the small family is comprised of two adult gray wolves and three pups, the LA Times reports. The pack has also traveled into neighboring Plumas County. Both counties butt up against Shasta County where the famed Shasta wolf pack mysteriously disappeared over the past year; however, this new pack isn’t related to those missing-in-action.

Over the summer and fall of 2016, CDFW biologists began following via trail camera, scat and animal tracks two known wolves that were traveling together in Lassen County. Scat samples linked the male wolf to Oregon’s Rogue Pack; the female’s origins were unknown. In May 2017, CDFW biologists teamed up with U.S. Forest Service biologists to keep tabs on the wolves travel route, eventually tracing the duo to the Lassen National Forest, according to a CDFW press release. After multiple trapping attempts over a 12-day period, CDFW biologists were able to trap the 75 lb. female and fit her with a GPS tracking collar on June 30, 2017.

“The anesthesia and collaring process went smoothly and the wolf was in excellent condition,” said CDFW’s Senior Wildlife Veterinarian Dr. Deana Clifford in a press release. “Furthermore, our physical examination indicated that she had given birth to pups this spring.”

The next day, trail cameras captured footage of the female with her three pups, confirming the five-member pack as the newest addition to Northern California. CDFW biologists plan to monitor the pack through the female, collecting data on her “activity patterns, survival, reproduction and prey preferences,” according to a press release.