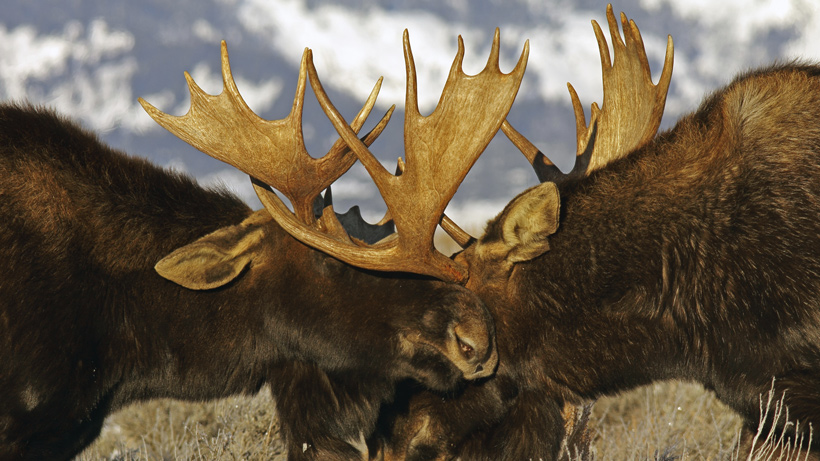 Moose are solitary animals and it takes patience to track one down, but landscape ecologist Hanem Abouelezz doesn’t mind: she’s working on one of the first studies conducted on moose within Colorado’s Rocky Mountain National Park. Moose numbers within the Kawuneeche Valley on the west side of the park have experienced a steady growth, increasing from a single known moose in 1980 to between 30 and 50 animals and many more roam the east side of the park, The Denver Post reports. With moose spottings in every drainage, Abouelezz and fellow park scientists want to find out why there seems to be a spike in population growth and determine any long-term effects.

To collect data on “moose population size, population growth, carrying capacity and habitat use,” Abouelezz and her research team began their study last summer, collaring 20 moose on the west side of the park and 20 more in the northeast. Moose are sedated while researchers take blood samples, measure heart rates and perform rectal biopsies before collaring the animals. During the study, researchers will also keep an eye on moose for signs of chronic wasting disease, which has already been confirmed in elk within the park.

According to John Mack, branch chief of natural resources for the park, more moose could mean “more stress on willow trees, which are 93 percent of a moose’s 55-pound-a-day diet.” Willow trees make up most of the park’s ecosystem. Their roots stabilize soils in riparian areas. Unfortunately, the trees are also susceptible to a fungus carried by birds, which can cause the tree to shed its leaves and stunt its regrowth. Without any natural predators like grizzly bears or wolves to keep moose numbers in check, Mack is concerned that the willow tree-based ecosystem could be in jeopardy if there are too many moose grazing on the willow trees.

“Once you see the whole ecosystem start to suffer, the red flags go up,” Mack told The Denver Post.

This is why Abouelezz feels her study is important and is working to gather as much information as she can.

“The changes that caused this moose population to grow, the willows to die off and the riparian zones to be impacted didn’t happen overnight, and neither will the solution,” says Abouelezz. “We could do intensive, mechanized treatments to quickly restore the riparian area, but there are consequences we might not be able to predict if we don’t fully understand the scope of what we’re dealing with.”