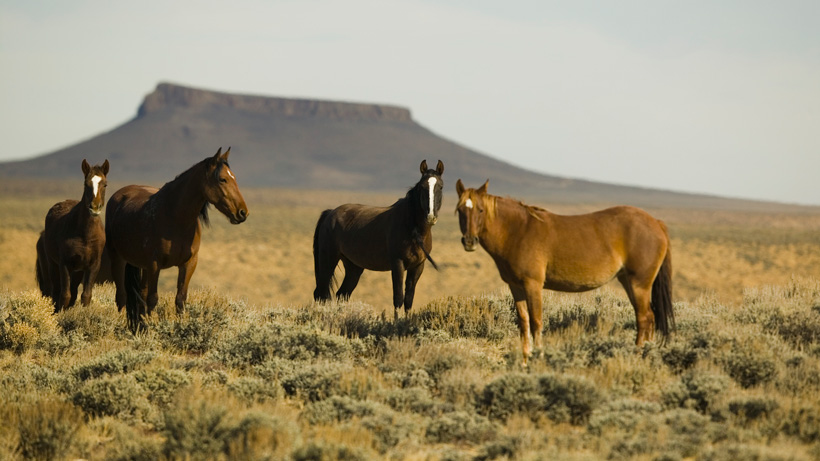 Nevada’s wild horse population is out of control. Once an iconic symbol of the West, the controversial animals are now considered a nuisance by many and, if the population continues to increase, will create a massive unsustainable strain on the land. According to the KUNR Public Radio, Nevada’s current wild horse population is more than 43,000 horses, which is “60 percent of all the wild horses roaming the West” and “nearly quadruple the 12,800 equids the Bureau of Land Management” (BLM) believes the Sagebrush State can sustain.

Current solutions have included many different ways to manage the prolific populations with the most recent being a collaborative agreement between a variety of stakeholders, including the American Farm Bureau Federation, National Cattlemen’s Beef Association, A.S.P.C.A., Return to Freedom Wild Horse Conservation, the Humane Society of the United States, Public Lands Council, and the Society for Range Management to reduce on-range populations through sterilization, removal and relocation of excess horses.

“I think Americans, as a whole, see this beautiful picture of the iconic American Mustang galloping off on the horizon with its mane and tail flowing in the breeze, and it's a beautiful sight,” Kena Gloeckner, a rancher near Ely, Nevada, who grows wheat and hay and grazes cattle on about a million acres of public land, told KUNR Public Radio. “People who live here, we understand that that image is very unrealistic.”

Because there are so many wild horses, they cause excessive damage to watering holes and decimate habitat because they graze continuously, leaving behind nothing for wildlife and ranchers who depend upon the land for their cattle. Gloeckner says it’s impossible to keep the horses out of Herd Management Areas carefully managed through rotational grazing to keep the areas healthy. The horses have also damaged her crops, destroying fences to get to her crested wheat and cost her thousands of dollars in both crop loss and ranching repairs.

Wild horse advocates have argued that BLM is embellishing the overpopulation problem, but Ben Noyes, a Nevada Wild Horse & Burro Specialist with BLM’s Ely District, told KUNR Public Radio that he’s seen the damage first-hand, “especially the spring areas, the riparian areas are really getting hit hard. They're getting pounded out. A lot of our winter fat sites [white sage brush] are getting destroyed.”

“And if you haven't seen horses die, to me, you haven't seen the real picture,” said Noyes. “It's pretty easy to sit at home and think it's just the Lion King show, but the reality of it is it's not that way on the range.”

“That's a noble thing to say, ‘Hey, we don't want any of them to go to slaughter.’ Okay, I get that,” said Mark Amodei, Nevada’s Second District Congressman. “But you still have to manage them on the resource. Adoption is a piece of the puzzle, but it doesn't solve the problem. The reproduction rates are much more robust than the 2,500 that are adopted a year.”

Using fertility control on such an ample population is also difficult as it requires two shots at close range, leaving BLM with what it’s currently doing to keep the population under as much control as it can: rounding the horses up and relocating them to corrals where they are cared for and fed—a “solution” that costs quite a bit. In fact, according to Jason Lutterman of the BLM, “over 60 percent of the BLM’s wild horse and burro annual budget” goes toward caring for and feeding these horses on pastures in Nebraska. And, while this solution worked temporarily, it doesn’t seem to be a good long-term one.

“We gathered around 11,500 animals from the range last year and our population still grew by several thousand animals and is 7.25 percent above last year's population, herd,” said Lutterman. “So you can see sort of the magnitude of the challenge that we're facing right now.”

BLM is currently working on several different fertility management methods and trying to “ramp up adoption programs by creating a new online adoption platform” that has garnered interest in Germany where Europeans have shown an interest in possibly adopting one of these animals, according to KUNR Public Radio.