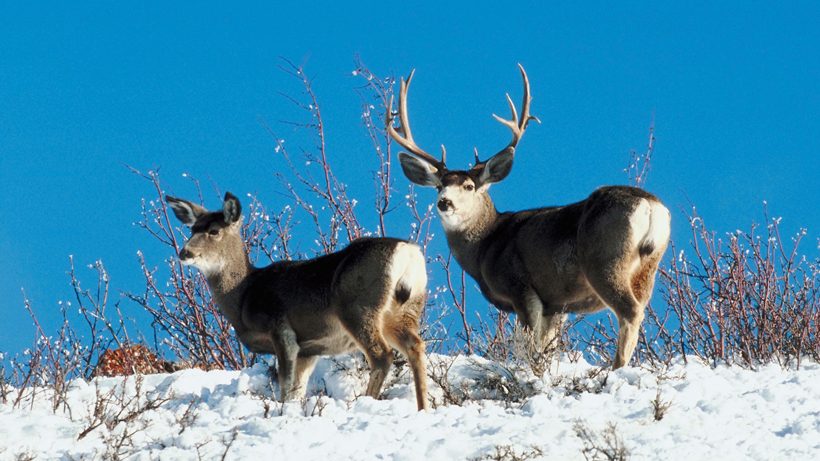 With mule deer numbers on a steady decline, Nevada officials are pointing at predation, wild horses and elk as reasons behind the drop. While there are several strategies under consideration, one of the main ones that Elko County is looking at is introducing a coyote bounty program, according to the Elko Daily Free Press.

Across Nevada, the overall mule deer population has decreased from around 240,000 in 1988 when the population was considered to be at “peak” to about 80,000 to 90,000 deer today. In Elko County, there are only about 32,000 mule deer, according to the Elko Daily Free Press, which is why Elko County Commissioner Wilde Brough has introduced the possibility of a statewide coyote bounty program.

“I’m trying to figure out how to get our mule deer back,” said Brough.

Brough is trying to determine what a coyote bounty program would look like in Nevada and, if the state decided to introduce one, would likely model it after Utah’s statewide coyote bounty program, which pays people $50 per coyote. In order to get the bounty, Utahns must turn in the ears and bottom jaw of the coyote, according to the Elko Daily Free Press. In Elko County alone, Brough believes there is about 10,000 coyotes. However, the Nevada Board of Wildlife Commissioners has told interested groups and individuals that “they do not want to go down that road” and adopt a statewide coyote bounty program, especially since there are other factors that impact mule deer herd numbers – not just predation.

Regardless, if the county moved forward with a coyote bounty program, it would also likely cost taxpayers money. In Utah, for example, the state legislature earmarked $500,000 to pay county bounty hunters; however, once 10,000 coyotes are killed for $50 each, that money is used up. And, in Utah, from 2016 to 2018, there were over 10,000 coyotes killed and turned in, meaning that the program exceeded its budget, according to the Elko Daily Free Press. Additionally, the program’s effectiveness is difficult to evaluate because Utah also works with the federal Wildlife Services agency to “do aerial removal of coyotes” in specific areas.

“I guess the overall philosophy is, a bounty to kind of keep pressure on coyotes in general, but then we like to go in and surgically remove them in areas where we have concerns based on our biologists’ experience on the ground,” said Darren DeBlois, Utah Division of Wildlife Resources Game Mammals Coordinator.

What do you think? Should Nevada have a coyote bounty program?