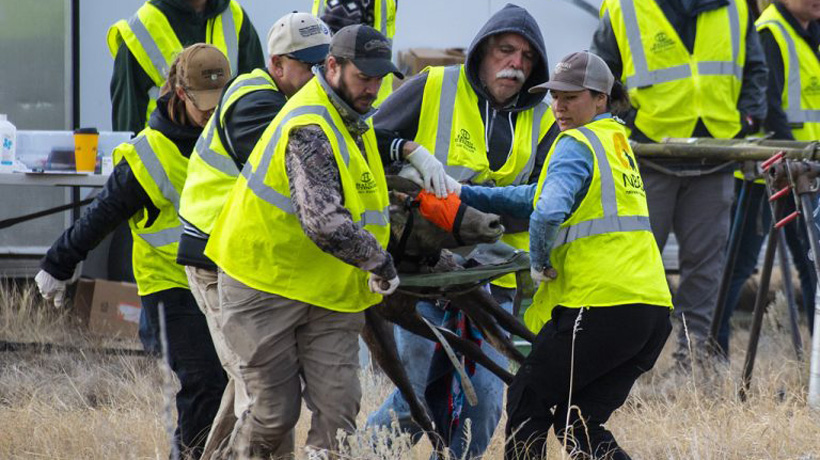 Twenty-seven bighorn sheep were recently outfitted with tracking collars in Nebraska’s Wildcat Hills. The successful project was completed this month and gives the Nebraska Game and Parks Commission (NGPC) a way to monitor the health, movements and distribution of bighorn sheep in the area for current and future management.

The helicopter capture crew headed out on the mornings of Sept. 20 and 21, using a net gun to capture individual sheep before transferring them to a sling bag and dropping them off at the processing site at Williams Gap Wildlife Management Area (WMA) on Sept. 20 and at Cedar Canyon WMA on Sept. 21. Each of the sites had experienced extreme wildfires this summer. While that can impact bighorn sheep initially, NGPC Big Game Disease and Research Manager Todd Nordeen said that “the long-term effects on their habitat should be minimal.”

At the sites, NGPC employees, partners and volunteers affixed the tracking collars and numbered identification tags on each animal, collected tissue samples and “returned them to the wild in a matter of minutes,” according to NebraskaLand.

What made this capture unique compared to previous ones is that it occurred in September when the weather was warmer as opposed to the historic practice of capturing only during the winter. Winter captures are common so the animals do not overheat; however, Nordeen said that September was selected due to the success of other western states capturing bighorn sheep in the summer.

“A considerable benefit is that the sheep have not yet grown their heavy winter coats that hinder cooling efforts,” said Nordeen.

However, body temperature was closely monitored during the capture and each animal was “doused with water” after the helicopter deposited it at the collaring site. The collars should last the entire life of the animal without need for replacement thanks to new technology and can even be removed remotely if necessary. “That means the animals may not need to be captured again,” said Nordeen, who noted that all of the bighorn sheep captured and collared during the project survived.