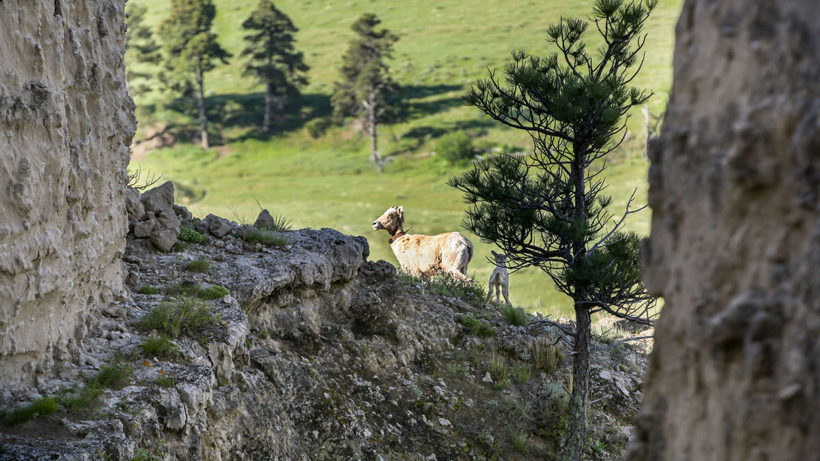 Nebraska bighorn sheep herds are swiftly declining because of bacterial pneumonia, which has caused massive die-offs and high fawn mortality over the last few years. In an effort to help struggling herds, wildlife biologists have stepped in. They are collaring newborn lambs and implanting pregnant ewes to track disease and death among the herds. This way, scientists can get a real grasp on how far-reaching the disease is and how it is impacting bighorn herds in the Pine Ridge of northwest Nebraska.

According to Omaha.com, only two lambs survived in 2015 and 2016 combined; all of the others succumbed to pasteurella pneumonia, a fatal respiratory disease that has infiltrated bighorn herds across the western landscape. While other states have also taken action to save bighorn sheep, this project is the first time Nebraska Game and Parks (NBGP) biologists have collared lambs and taken samples (hairs and cultures from the lamb’s nostrils and throat) for this type of study. Historically, NBGP biologists have discovered a high rate of lamb mortality 30 to 90 days after birth. Should the Pine Ridge collared lambs experience similar die offs this summer, the collars will help biologists locate the animals and hopefully figure out what “diseases and pathogens the newborns may already carry,” Omaha.com reports.

Biologists estimate that roughly 350 bighorn sheep make up five wild herds that span western Nebraska. So far, 35 to 40 lambs have been born to the three herds that live in the Pine Ridge. To find the newly born lambs, biologists have to work fast because bighorn sheep are often on their feet within hours of birth.

“Every day they gain strength and more agility,’’ Todd Nordeen, big game research and disease program manager for the Nebraska Game and Parks Commission, told Omaha.com. “It’s amazing how quickly they start keeping up with mom and getting into escape cover.”

Hopefully, the project will shed some light on how disease is invading these bighorn herds and come up with an action plan to help save the dwindling numbers. Funding for the project comes from the Nebraska Big Game Society, the Iowa Foundation of North American Wild Sheep and those who have bought Nebraska hunting permits.