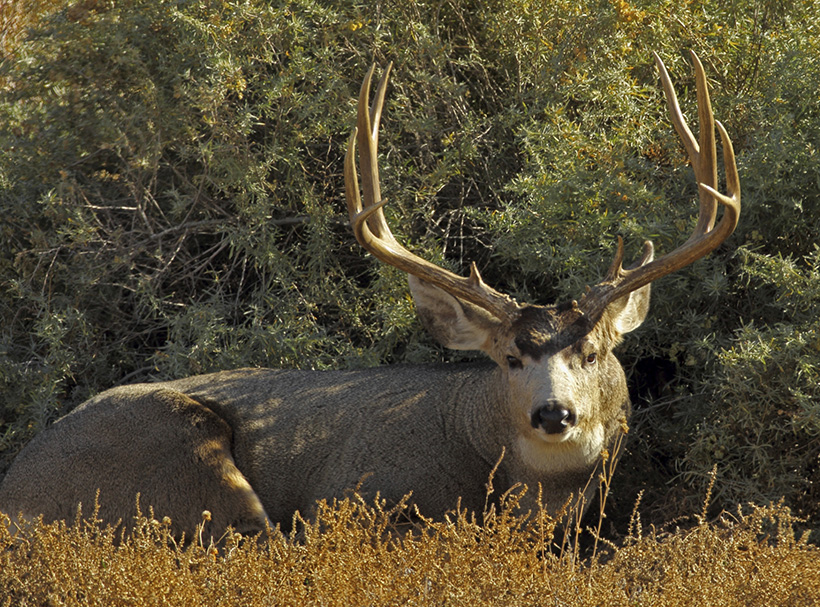 Thanks to diligent conservation and restoration efforts, the mule deer habitat in the western United States has improved. This is likely to lead to healthier mule deer numbers and a growing number of opportunities for hunters in the future.

Mule deer have relatively small stomachs, which make them particularly selective eaters. Rather than eating large amounts of low-quality forage, they will select the most nutritious parts of certain plants. These plants vary depending on the season, but the majority of a mule deer’s diet is comprised of broad-leaved, non-woody plants such as buckwheat and lupine and browse.

A mule deer’s ability to thrive is strongly correlated with the amount of precipitation its habitat receives. Precipitation can impact plant growth and quality, habitat health and deer nutrition, deer distribution and movement, predation and even disease.

Most rangelands throughout the West do not receive great amounts of moisture, and given the prolonged state of drought, it is not a surprise that mule deer populations have struggled in recent years.

In a drought, there are fewer plants, and the plants that do remain have diminished nutritional value. Does struggle to produce enough milk to nourish their fawns, leaving the young too weak to survive their first year of life.

The mule deer on the Spanish Fork Ranger District, a part of the Uinta-Wasatch-Cache National Forest in Utah, for example, are thriving thanks to improved forage.

“During the past three years, our forest along with partners have thinned the pinyon-juniper landscape to allow these woody shrubs and types of vegetation to grow, thus restoring 4,000 acres of grassland and sagebrush-steppe habitat that supplies the kind of diet needed for mule deer,” explained George Garcia, the district’s ranger. “Another 12,250 acres of pinyon-juniper landscape treatments are planned, which will further improve the winter range conditions for these mule deer and benefit sage grouse habitat as well.”

The success of this project is just one instance of how the U.S. Forest Service and its partners have helped to rebuild and restore the millions of acres on national forests and grasslands that serve as the habitat for the deer across the country.

One of the key programs in mule deer habitat restoration is the Million Bucks program. Started in 1989, the Million Bucks initiative is a partnership program that focuses on management of National Forests and Grasslands to restore habitats and support healthy deer populations. The basis of the program is the collaboration between the U.S. Forest Service and several partners, including the Mule Deer Foundation, who recently renewed their 25-year-old partnership with the agency.

“Working together we can ensure a healthy population of mule deer on national forests,” stated Miles Moretti, Mule Deer Foundation president. “We’re expanding our partnership efforts to increase public awareness of the importance of this icon of the West.”

Given the cumulative impact of stressors on mule deer populations numbers — including predators such as coyotes, mountain lions and wolves, human poaching and habitat fragmentation — conservation efforts are more important than ever.

“We cannot control the weather, and predator management is very expensive and really only effective in small areas,” Moretti told goHUNT.com when asked for more details. “What we can do, and have proven effective at, is working to enhance or restore mule deer habitats. We have a number of landscape initiatives. We are working on both summer and winter ranges as well as some areas in between. Mule deer need good nutrition in the summer in order to arrive in their winter range with enough fat content to survive the harsh weather and breed in the spring,” he explained.

It is collaborative efforts and strategic approaches such as this that have helped enhance the productivity of mule deer populations and will have long-term results.