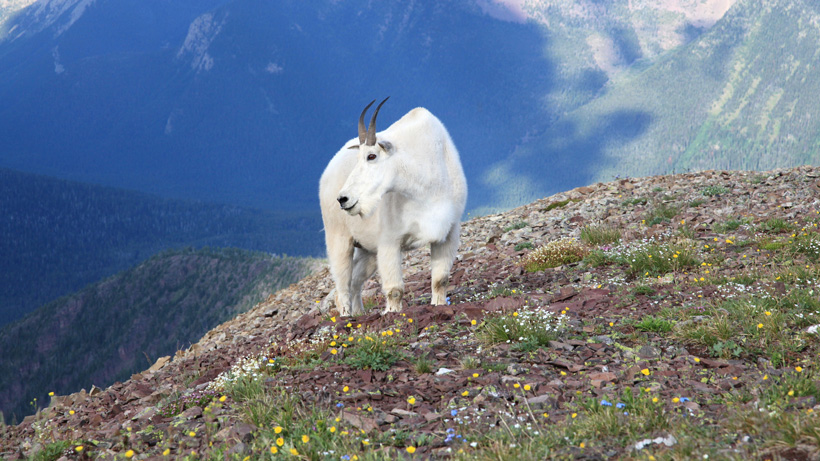 Mountain goat populations are holding steady in the Selkirk Mountains in Idaho. Last month, Idaho Department of Fish and Game (IDFG) biologists took to the air in a Bell 47 “bubble ship” and counted 57 mountain goats, completing the first survey of the animals since 2001, The Spokesman-Review reports.

“We flew the survey area looking for the off-white fur of mountain goats or tracks in the deep snow,” said IDFG biologist Laura Wolf. “Within each survey area, we fly contours usually starting at the lowest elevation and climbing to the top of the ridgeline. Very few other animals are hanging out where mountain goat live, so tracks are a good indication you have a goat or two to find.”

Between 2011 and 2018, IDFG only offered one mountain goat tag in the Selkirk zone (Region 1), according to The Spokesman-Review. And, in 2019, to help boost the herd, “Idaho implemented a conservative management plan,” according to Wolf, which is what sparked the recent survey. Hunters “justifiably wanted updated data,” said Wolf.

This is partially due to how sensitive mountain goat populations are to outside impacts like hunting and the fact that populations are not as prolific as other wildlife. In 2001, biologists tallied 34 mountain goats, which means that, despite the slow and steady growth, the population within the Selkirks is doing pretty good. The current management plan recommends a hunting season when the ratio is 15 kids to 100 adults in June, according to The Spokesman-Review. The recent tally found about 13 kids per 100 adults.

“Spotting 57 goats indicates the population has held steady and hasn’t been too disturbed by an expanding human population in the region,” said Wolf, who noted that the Selkirks are good mountain goat habitat. In fact, historically, the area had more than 200 mountain goats at one time.

“The Selkirk mountains is a unique ecosystem in Idaho than holds a large variety of wildlife species besides mountain goats (mule deer, elk, moose, wolverine, grizzly bear, lynx),” said Wolf. “It is a popular spot to recreate both in the summer and winter. But the presence of all these species means that there is quite a variety of habitat types, many of which are intact and provide connectivity.”