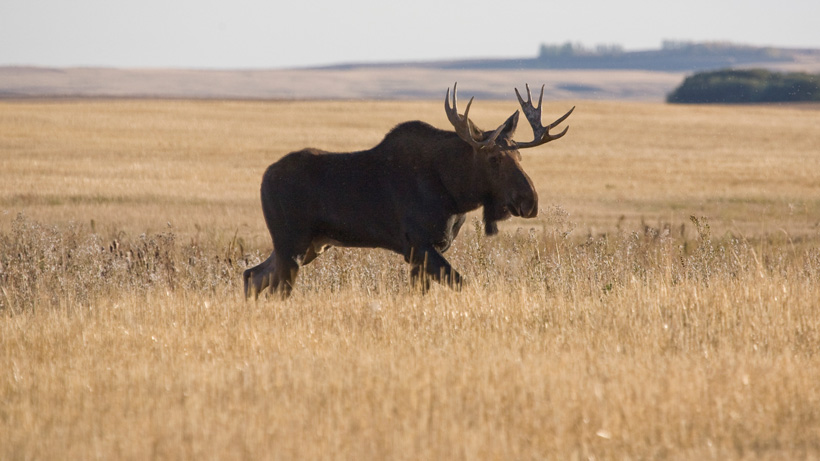 Are moose moving into New Mexico? Within the last two years, residents of Costilla and Chama have taken photos of a “lone moose seen strolling along State Road 522” and two cow moose, respectively, according to the Los Alamos Reporter.

“Most people think it’s an elk,” said Taos Supervisory District Sergeant Gabe Maes, who has been stationed in northern New Mexico since 2007. “That is the first reaction for most folks. It’s an unusual sighting for the area.”

Moose typically stick to the northern portion of the U.S. In fact, their natural range encompasses Alaska, Canada, New England and northern New York as well as Wyoming, Colorado and parts of eastern Utah. However, while rare, moose have been spotted in the state off and on since the 1990s, sticking primarily to the Taos, Chama and Tierra Amarilla areas.

“Though these are rare occurrences they do seem to happen especially on dry years,” said Sergeant Ben Otero. “The moose seem to follow the river down and come to the irrigated fields for the green alfalfa and water sources.”

There is no evidence of any reproducing populations of moose in the southwest, according to Jennifer Frey, a professor in the Department of Fish, Wildlife and Conservation Ecology at New Mexico State University. And the moose residents may see in the area are not the same caliber as those that call Alaska home. Frey points out that the “type of moose in Colorado is a smaller subspecies, Alces americana shirasi.”

“In New Mexico, the moose we have in the state are undoubtedly wanderers, males or females,” said Frey. “These occasional records of moose in New Mexico are probably not reflective of a breeding population and are just occasional individuals.”

And random moose sightings don’t mean that the animals are planning on establishing residency. Rather, they’re likely following forage that brings them across state boundaries. Plus, the state doesn’t exactly have a plethora of moose habitat available compared to its northern neighbor, Colorado.

“I don’t think the presence of moose [in New Mexico are] trying to establish a population in this state would be a good idea,” said Frey. “In New Mexico, we already have a problem with our riparian and wetland systems being degraded. There is effort to try to restore riparian vegetation in our streams. Having such a species here would be counter-productive at this point.”

And having moose present in the state doesn’t mean wildlife officials plan on establishing any sort of hunting season.