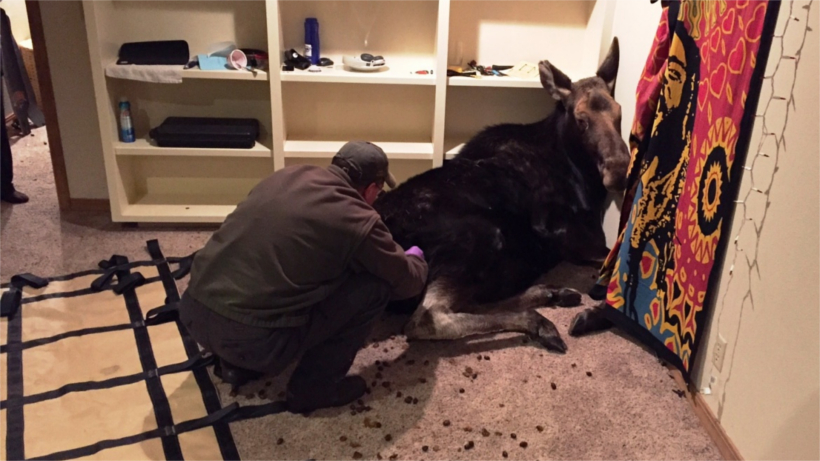 Last weekend, an Idaho family got the surprise of a lifetime when they wandered downstairs and found a cow moose in their basement. Blaine County Sheriff deputies and Idaho Fish and Game (IDFG) officers quickly arrived at the scene. Authorities surmised that the animal had ventured into the area to escape the weather and, unfortunately, fallen into a 3’ deep window well, which led into the home.

“The window opened like a door and the latch was loose,” Lt. Steve England told EastIdahoNews.com. “The moose pushed her way through and, amazingly enough, the window didn’t even break.”

The family used furniture to contain the animal to one area of the basement while they waited for help to arrive. Initially, officers tried to persuade the animal up the stairs, but, according to IDFG Regional Conservation Officer Josh Royse, “the moose was having none of it, charging the officers several times.”

Ironically, this isn’t the first time IDFG has had to free a big game animal from a random suburban home in Hailey, ID. Last winter, a female elk had to be similarly rescued after crashing through a basement bedroom window, according to IDFG.

Eventually, IDFG officers were able to tranquilize the moose before all of the officers carried it up the stairs and out of the house.

“Fish and Game then woke her up and it went on its way,” says England. “The family will be telling this story for years.”