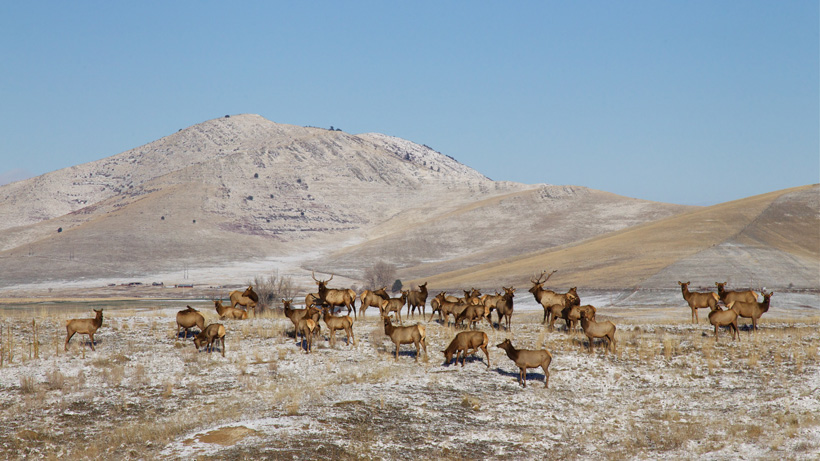 Following the recent confirmation of chronic wasting disease (CWD) within the state, Montana officials are asking Wyoming to halt its supplemental winter elk feeding program. Last week, the Montana Fish and Wildlife Commission sent a letter to the Wyoming Game and Fish Commission that said “its elk feeding practices could accelerate the spread of the fatal, contagious disease,” the Jackson Hole News and Guide reports.

“We respect the fact that how Wyoming manages its affairs is up to Wyoming,” stated the letter. “However, Montana’s ability to combat CWD will depend upon decisions that Wyoming makes about its wildlife management.”

As goHUNT previously reported, Montana made this request back in March, following reports that Wyoming’s elk feedgrounds were tainted with CWD. Montana officials say that feedgrounds breed disease, which can lead to widespread infection that crosses state boundaries. Wyoming currently manages 22 feedgrounds across the state, aimed at helping elk survive winter when food sources are scarce.

Dan Vermillion, chairman of the Montana commission, told the Bozeman Daily Chronicle that “the letter is not a demand, but a request for the state to consider,” adding, “It’s a big sacrifice for the people of Montana to make. If those feedgrounds are still out there, that will counteract any progress we make potentially down the road.”

As of late last week, Wyoming Game and Fish commissioner Mike Schmid had not seen the letter.

“Wyoming’s been feeding elk for many years, and in a lot of ways it’s been beneficial to the state,” Schmid told the Bozeman Daily Chronicle. “I think there’s got to be a lot more discussion before I could say one way or the other if there’s a potential for reducing feeding of the elk.”

Montana’s “special” CWD hunt began on Friday. The two-month hunt will run through Feb. 15. Biologists hope to gather enough information through hunter harvest samples to determine how extensive the disease is and come up with an action plan to keep it contained.