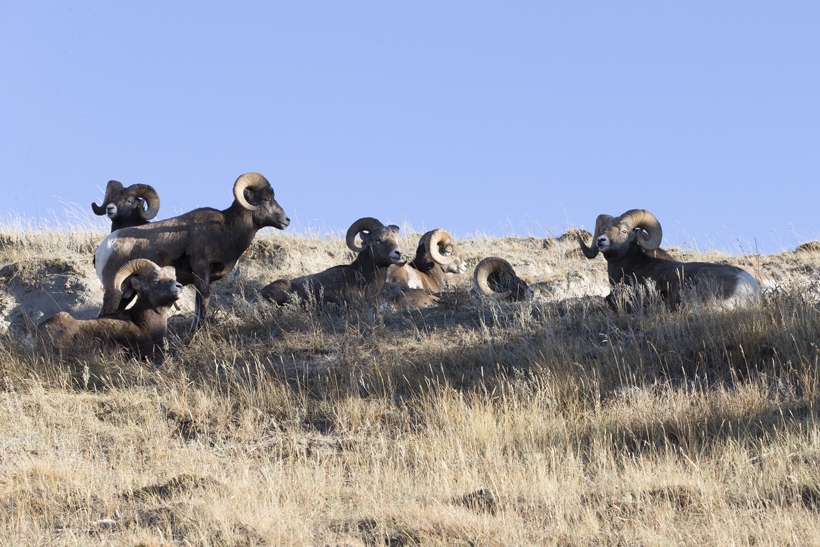 Generally speaking, the Montana Department of Fish, Wildlife and Parks (FWP) has been successful in helping bighorn sheep populations expand and increase across the state. The overall bighorn population has grown from an estimated 1,200 animals in 1950 to a current population of about 5,700.

This increase is largely attributed to the state’s aggressive trap-and-transplant program. According to John Vore, FWP’s game management bureau chief, between 1922 and 2012, the agency has trapped 2,717 sheep for transplants, herd augmentations or out-of-state relocation.

Over the last several years, however, the agency has encountered a number of challenges in finding suitable new habitat for the bighorns within Montana. The goal FWP set forth in 2010 — to establish five new huntable populations of bighorn sheep in the state by 2022 — now seems improbable.

In 2013, plans to transplant sheep to public land near Lewis and Clark Cavers was canceled after a Cardwell legislator and landowner said he was unaware of the proposal and introduced a bill to restrict future transplants. The bill died in committee and the transplant proposal was nixed.

Later that same year, a proposal to place bighorns in the Bridger Mountains was put on hold because of the proximity of domestic sheep, which have been known to transmit lethal bacteria to bighorn sheep.

Then, this year, a transplant in the Madison Mountains was pushed back to 2014 after officials detected an outbreak of pneumonia in the parent herd.

Just last week, the commission rejected a proposal to relocate some bighorn sheep out of state, saying they would prefer the agency either find new locations in Montana or transfer animals between existing herds.

Yet moving sheep from one herd to another is also dangerous as it increases the risk of spreading infection.

More than 460 bighorns have been sent out of state to establish new populations or augment existing populations in Oregon, Idaho, Washington, Nebraska, Utah, Wyoming and North Dakota. The last out-of-state transplant was to Utah in 2009, before Montana instituted a ban on relocating sheep out of state.

Wildlife managers have recommended ending the state’s policy barring out-of-state relocation, saying that overpopulated herds are making the animals prone to disease outbreak and they are having difficulty finding suitable relocation sites within the state.

This has prompted the state’s wildlife commission to conclude that it may be time to rethink the state’s conservation strategy for the popular big game species.

“I guess what I’m hearing is ... we don’t have any place in Montana to place sheep,” said Dan Vermillion, Fish and Wildlife Commission chairman, at the group’s last meeting.

Vore stated that he is preparing a presentation for the commission that outlines the criteria for where sheep can be established and the places the department has already considered that do not meet those standards.

“We keep looking at areas and we’ve looked at many, many,” Vore relayed.

Yet some officials, such as now-retired FWP biologist Tom Carlsen, who sits on the Montana Wild Sheep Foundation board, and is also one of the authors of the state’s bighorn sheep plan, beg to differ.

“Quite frankly, I don’t think they’ve exhausted all of the (habitat) possibilities,” Carlsen contends, pointing to the Tobacco Root and Snowy mountains as viable options.

Carlsen maintains that FWP is too focused on managing higher profile wildlife — such as wolves, bison and elk — that demand too much of the department’s resources. This leaves less time, energy and resources available to manage the bighorn sheep, which doesn’t sit well with Carlsen given the fact that an annual auction of a Montana bighorn sheep tag brings in hundreds of thousands for sheep management.

One thing that Carlsen does believe the FWP has right, though, is that transplanting sheep to other states is the best way to reduce sheep herds to ideal management levels. He even goes as far as to say that the commission’s decision not to move sheep out of state was “bad biology.”

“You’re putting those populations that are over objective at risk,” Carlsen contested. “They are more susceptible to disease when they are at a high density.”

In the winter of 2009-10, more than 500 bighorns died from disease in the greater Missoula area, with two of the four herds impacted experiencing die-offs of 60% or more.

“What I’d like to see them do, and they are doing it in other states, is go in and remove all of the animals and start over,” Carlsen said. “You can’t augment a herd that’s carrying disease.”

Carlsen explains that following a major outbreaks of disease, bighorn lambs born to the surviving ewes will often perish as bacteria is passed on. He used the example of the Elkhorn Mountain herd, where he worked to establish a bighorn population. In that herd alone, 80% of the animals have died from disease, devastating the once-thriving herd to the point where only 20 to 30 bighorns still survive.

“Why fiddle around and wait for a potential recovery that never happens,” he said. “And that’s another way to use in-state sheep.”