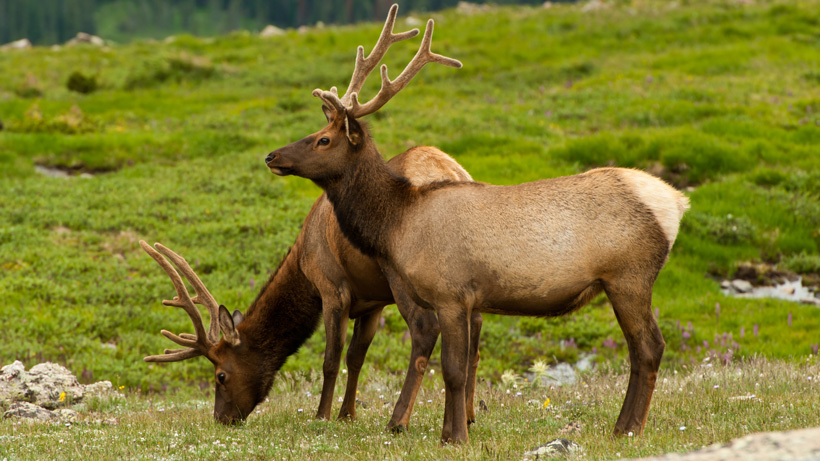 Missouri elk are thriving – and, this fall, five lucky hunters have the chance to harvest one during the state’s first elk hunt since the 1800s. This week, five resident hunters were drawn out of 19,215 applications, which included “33 for one resident-landowner antlered elk permit and 19,182 for four general permits,” KRMS News reports.

Bill Clark, Joseph Benthall, Michael Buschjost, Samuel Schultz and Eugene Guilkey are the lucky hunters participating in the state’s inaugural elk season. According to KRMS News, that includes a nine-day archery season in October and rifle season in December on a 20-acre area known as the “Elk Restoration Zone” in the southern portion of the state. Out of those five, Clark drew the resident-landowner antlered elk permit; the other four drew the general permits.

Hunters will be allowed to harvest one bull elk with one antler that is a minimum of 6” and they can hunt during both the archery season (Oct. 17 to 25) and firearms season (Dec. 12 to 20).  With the resident-landowner permit, Clark may hunt his 80 acres east of Peck Ranch Conservation Area while the general permit hunters can hunt within Carter, Reynolds or Shannon counties, “excluding the refuge portion of Peck Ranch,” according to KRMS News.

Elk were once native to the state, but during the 1800s, were hunted to extinction. Multiple recovery efforts over many years brought the native animals back.

“Growing up in Missouri, I used to hunt rabbit, squirrel, quail, and dove, along with deer and turkey. I have never hunted elk,” said Guilkey. “I suppose the cost of a trip like that kept me from pursuing that dream. I also battled cancer last year, and during my battle and recovery, I found an elk-hunting show on television that only hunts public land. I thought perhaps one day I could do that… and now I can! At this time last year, I was given the news I had cancer. Now, a year later, I’ve been given the opportunity of a lifetime! Thank you for the chance!”