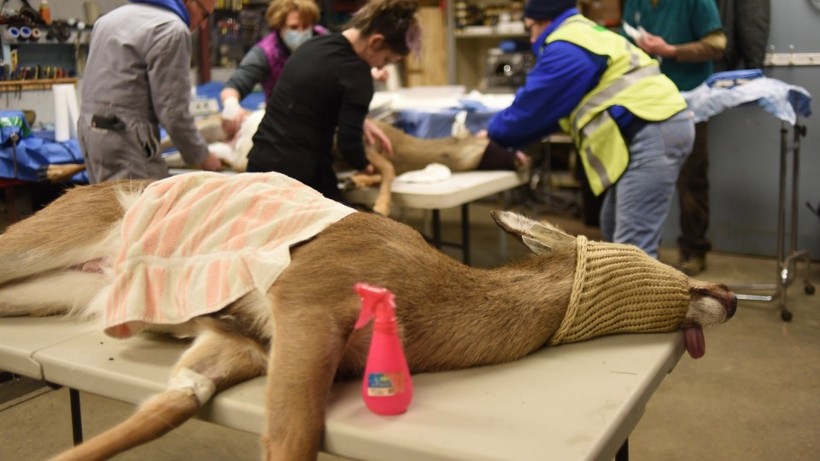 In places where deer numbers are booming, scientists are taking unusual steps at keeping the population in check. It’s tricky and expensive, but one state is giving it a try: sterilization. In Ann Arbor, MI, a team of volunteers comprised of local veterinarians and vet techs have gathered together to surgically sterilize deer in order to create a sustainable population.

Mlive.com says that the project, though experimental, is city-funded and state-permitted and has already “successfully sterilized 53 female deer” since it began last week. After the procedure where skilled veterinarians remove the deer’s ovaries, the animals are returned to their home turf – the streets of Ann Arbor, MI. The project was proposed by Ann Arbor Residents for Non-Lethal Deer Management.  White Buffalo Inc., a Connecticut-based nonprofit wildlife control company, was hired by the city to coordinate the non-lethal deer management program.

The approved plan allows for the sterilization of a minimum of 60 deer and as many as 80, according to Mlive.com. Yet, this doesn’t mean the city doesn’t have other plans in place. A city-wide deer cull will also occur Jan. 30 through Feb. 13 and affect area parks where there are excess deer; the city is overrun with the burgeoning population.

“There are vaccine programs that are highly intensive, and labor-intensive, money-intensive programs, and we decided, of course, so is this,” Steve Timm, a veterinarian from Wisconsin who is serving as lead surgeon, told Mlive.com.  “But in certain situations where you can’t do culling, don’t want to do culling, shouldn’t do culling/sharpshooting, this may be a very good plan of attack.”

The sterilization program was approved by the Michigan Department of Natural Resources. All deer that undergo the procedure are collared and tagged so that researchers can keep tabs on their location and determine if the program is working.

Michigan isn’t the only state to use this type of procedure to manage the proliferation of deer. California, Minnesota, Virginia, Connecticut and New York have tried similar tactics to lower deer populations. While somewhat costly, a program like this allows for non-lethal deer management in specific areas where culling isn’t a choice.

"I really think there will come a year, relatively soon,” Kurt Sonen, an Ann Arbor resident who supports lethal sharpshooting and is a member of the pro-culling group Washtenaw Citizens for Ecological Balance, told Mlive.com. “Where you’ve taken out the deer eligible for lethal and you’ve sterilized the other deer, assuming the City Council continues on with this, and you’d be pretty much in a stasis mode.”