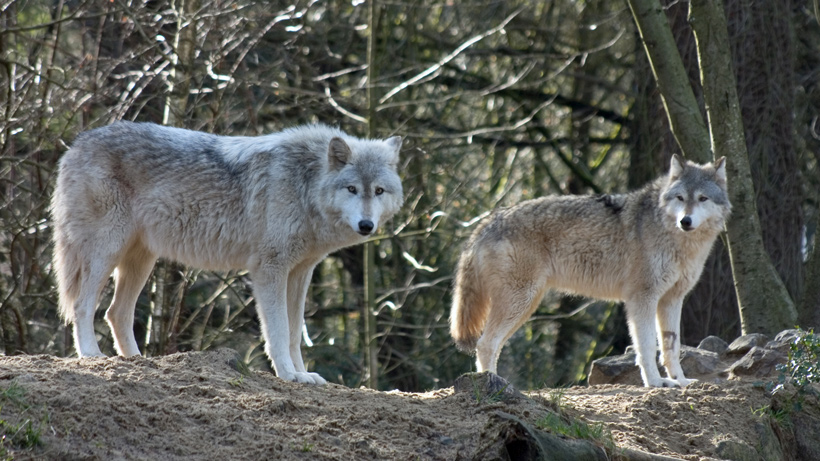 Isle Royale is infamous for its rugged wilderness – a destination for adventurists, outdoor enthusiasts and wildlife lovers who want an isolated escape. Located 55 miles away from Michigan’s Upper Peninsula in Lake Superior, the island is home to a flourishing population of moose and a dwindling pack of wolves. In fact, according to the Detroit Free Press, that pack is “an inbred, genetic tangle” as they are both half-siblings and father and daughter.

They are also the last two wolves left on Isle Royale.

John Vucetich, a Michigan Technological University wolf researcher, spotted the two during the university’s annual winter study on wolf and moose populations. He estimates the father to be nine years old; the daughter/half-sister, seven.

“They are not in their prime anymore — they're old wolves now,” says Vucetich, adding that this has been a good thing for moose populations on the island. Because of low predation, moose numbers are on the rise and will likely continue to rise if their easy-going Isle Royale existence continues. This year, researchers counted 1,475 moose, which is down from last year’s count of 1,600, but still quite high.

However, moose eat a lot. If an adult moose eats up to 60 lbs of plants per day, imagine what could happen to Isle Royale’s ecology—and the moose population in general – if this goes unchecked.

“I think we’re on a knife’s edge,” says Vucetich. “If wolves don’t get it back together soon, if wolf predation isn’t restored promptly, a severe winter could just make (a large-scale moose die-off) happen. But even absent a severe winter, the bottom could just drop out of the food supply at some point.”

Fortunately, a plan is already in the works to restore wolves to the island for this purpose. The National Park Service (NPS) announced that it will move forward with its plan to reinstate 20 to 30 wolves on Isle Royale over the next three years, according to the Detroit Free Press. The announcement occurred in March and NPS hopes to start relocation efforts as early as this fall.

“Wolves are a key component of the Isle Royale heritage and part of what makes this national park one of Michigan’s unique treasures,” said U.S. Sen. Gary Peters, D-Mich. “By reintroducing wolves onto the island, the National Park Service is also taking steps to restore and preserve the entire Isle Royale ecosystem.”