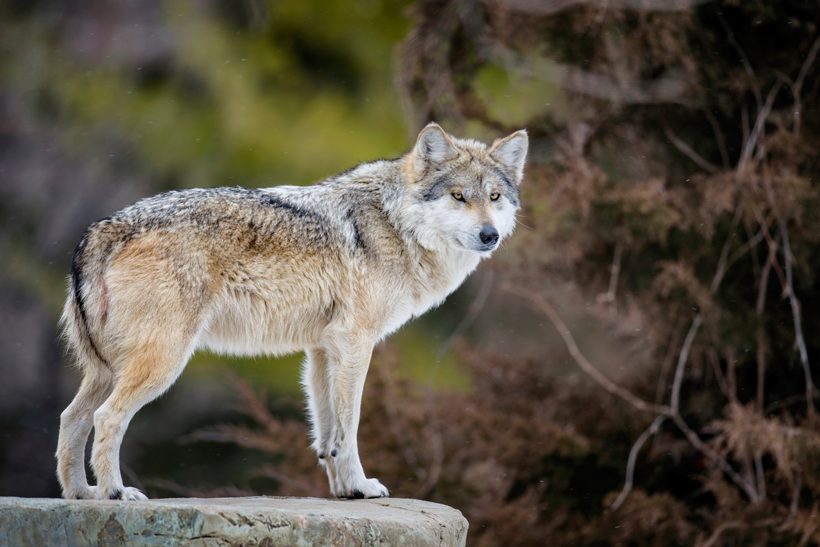 Mexican wolves are making a comeback. Current recovery efforts have helped double the Mexican wolf population over the past five years with the latest wolf census documenting a total of 109 animals in Arizona and New Mexico, up from just 50 wild wolves in 2010. This is a 31 percent increase since 2013 and the fourth consecutive year with an increase in wolf pack numbers over ten percent.

“In 1982, the Mexican wolf recovery team recommended a population of at least 100 animals in the wild as a hedge against extinction; until we initiated the first releases in 1998, there had been no Mexican wolves in the wild in the United States since the 1970s,” says Southwest Regional Director Benjamin Tuggle. “Although there is still much to be done, reaching this milestone is monumental!”

The 2014 Mexican wolf survey, which was conducted by a fixed-wing aircraft and helicopter, resulted in a confirmed total of 19 packs with a minimum of 53 wolves in New Mexico and 56 wolves in Arizona. 14 of the packs had at least one surviving pup while two had at least five surviving pups through the end of the year.

Doubling the number of healthy Mexican wolves in the wild illustrates the significance of wolf recovery efforts and future reintroduction for wolf pups within established packs. According to Arizona Fish and Game, last spring wildlife biologists began a new procedure that placed genetically-valuable wolf pups into a similarly-aged litter within an established pack. Officials are using this method to improve genetics within the wild population and have already seen the implications of stronger genetic health for wild packs. According to U.S. Fish and Wildlife, the next step will be establishing a genetically vigorous wolf population on a working landscape.

Among wolf advocates, this is positive news, but some still feel that numbers are low and Mexican wolves should remain a protected species under a subsection of the Endangered Species Act, listing them separately from gray wolves. There is also a push to expand the territory of the wolves. Some also question FWS’s decision to grant permits to allow for people and state agencies to kill the wolves if they threaten livestock or negatively impact other wild herds like elk or deer. The future of the controversial species is still a heated topic.