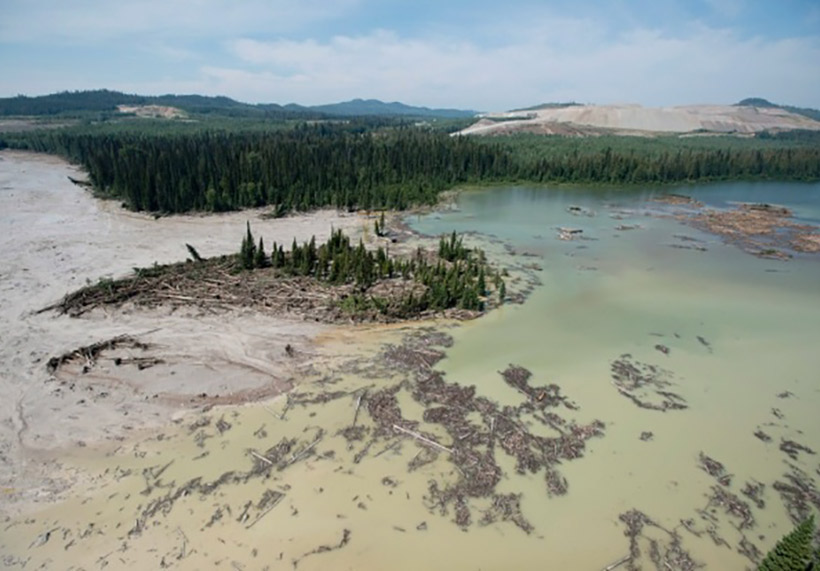 Earlier this month, an earthen dam at Mount Polley Mine in British Columbia breached, sending contaminated water surging into nearby lakes. This is one of the worst environmental disasters in North America, threatening the province’s watershed and all of wildlife in the surrounding environment.

The sheer size of waste was enough to fill 2,000 Olympic-sized swimming pools.[ pullout quote, if you can]

The most recent test results of sediment reveal elevated levels of seven chemicals. They include copper, iron, manganese, arsenic, silver, selenium and vanadium.

However, the Ministry of Environment says that these levels are consistent with testing done before the breach. They also added in a statement that the results suggest “low but potentially significant arsenic and selenium concentrations” in sediments from within the immediate impact zone. Accordingly, Interior Health will closely monitor the results to asses long term health risks.

A ban remains in place on the consumption or recreational use of the water from affected rivers and lakes. Although the owners of the mine, Imperial Metals, issued a statement that the water-use ban is only in place to “be on the side of caution.”

Another concern is the mysterious, blue substance that has been seen floating on the lake below the mine tailings disaster. British Columbia has said there is nothing to fear, saying that it is likely to be “organic.”

The substance appeared in the weeks following the breach. Local residents said that they were even more concerned about the odd blue film because when they touched it, it caused a burning sensation on their skin, reported Vice.

What is even more puzzling is that the substance transforms into a gas. When a sample is taken in a jar, the blue film seems to disappear, but once the lid is opened, a hiss of escaping steam is released.

Renowned marine biologist Alexandra Morton paid a visit to Cariboo recently to see for herself. She specifically visited Hazeltine Creek, Polley Lake and Likely, taking samples of water and sediment along with photos, videos and documenting oral accounts from the locals.

In short, Morton said it was a “visit to hell.”

“I walked up to what was Hazeltine Creek and is now this canyon of toxic waste,” Morton recalled. “It’s all shades of grey, there’s grey water coming down. It burns your eyes, it burns your sinuses and your lungs.”

She was particularly disturbed by the vast number of bear, moose and deer tracks covering the land that had once been a vital water source for wildlife.

“The pock-marked, caked substrate looked like bubbles had burst as it was drying. There were burnt-looking formations that bore no resemblance to anything I have seen, formed as the tailing waste reacted to oxygen,” she said.

As for the blue substance, Morton stated that: “It looks like hot bacon grease thrown on cold water and it smells bad. When you touch it, it burns your skin like a jelly fish sting.”

She also noted the blue substance’s transformation into a gas.

When she reported her findings to the Interior Health Authority, she received the following message from regional director of health protection, Roger Parsonage:

“Thank you again for alerting us about the blue film that you are observing on Quesnel Lake. I would appreciate whatever assistance you can provide in getting this message to people who have suffered health effects from exposure to this substance. If possible, see their healthcare provider for a diagnosis.”

Morton was told that the Ministry of Environment was taking samples for analysis. She collected her own samples as well.

The implications that this spill has for the environment are extraordinary. The toxic-water has washed downstream and will have major impact now and for years to come.

“Water will continue to run through literally tons of this sediment and grass will grow through the sediment,” said Brian Olding, an environmental consultant who conducted research on the Mount Polley Mine in 2011. “Imagine if a moose eats that grass, and then an aboriginal person comes and shoots that moose. Then we have a food contamination issue on our hands.”