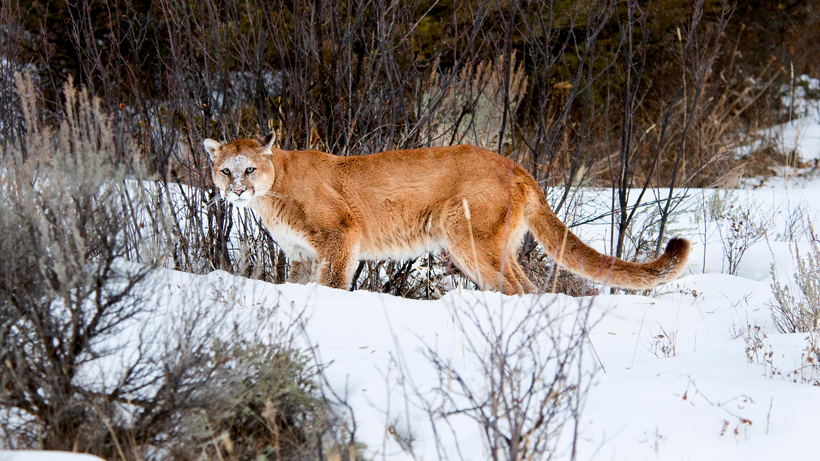 Sikich was part of the team to locate P-95 after the animal entered a cage filled with roadkill deer; the door shut upon entry, notifying biologists that something was in the cage on Jan. 17. Once captured, the team tranquilizes the cat, giving them about an hour to “take physical measurements, check the animal’s health, tag the ear, and collect blood and tissue samples,” according to the Los Angeles Times.

A Facebook post from the Santa Monica Mountains National Recreation Area shared P-95’s stats. The cat weighed 90 pounds and is thought to be about one and a half years old; biologists said he was, overall, in good condition. During the process, Sikich said that the biologists heard “chirping noises and later spotted another big cat – likely the young lion’s mother or sibling.”

“Mountain lions, in general, aren’t that vocal but they will communicate when a mom is with her kittens, or siblings with each other,” said Sikich.

Out of the other nine mountain lions currently tracked in Los Angeles County, seven are in the Santa Monica Mountains and two are in the Simi Hills. According to the Los Angeles Times, GPS collars are programmed to provide locate data eight times each day: every two hours between 5 p.m. and 5 a.m. and once more at 1 p.m. This is because mountain lions tend to be most active at dawn and dusk “patrolling their territory.”

Researchers have been tracking mountain lions this way since 2002 – collaring nearly 100 cats in the process – and have determined that one of the major barriers to mountain lion movement is the busy freeway, which Sikich said “most animals don’t attempt to cross it.” Because of this manmade barrier, Sikich described “the Santa Monica Mountains as ‘an island of habitat’ confined to the south by the ocean, north and east by freeways, and west by agricultural fields.”

“Many animals are not leaving the Santa Monica Mountains and aren’t crossing the freeway,” said Sikich, which could eventually harm the solitary animals that need plenty of territory to roam. It could also increase their risk of inbreeding.

Scientists hope to use the GPS data to determine where overpasses can be built along the freeway for safer passage, according to the Los Angeles Times.