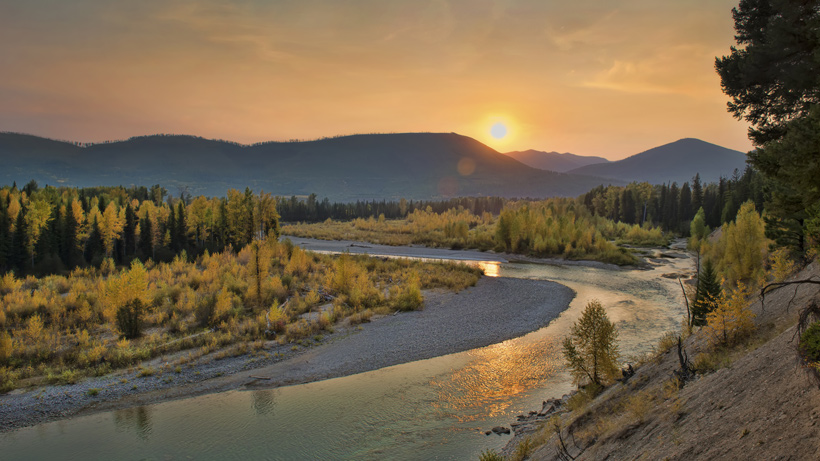 Commercial and residential development, logging projects and roads can divide critical wildlife corridors that are necessary for animal populations to thrive. However, specific land acquisitions can fix these Interruptions and reconnect these vital habitat animal highways. Recently, the Vital Ground Foundation (VGF) and Yellowstone to Yukon Conservation Initiative (Y2Y) worked together to purchase a significant chunk of land in an undeveloped subdivision that will provide more space for grizzly bears and other animals along the Kootenai River near Troy, Montana.

The purchase is in addition to a 2017 acquisition of seven contiguous lots, resulting in 42.5 conserved acres “near the confluence of the Yaak and Kootenai Rivers,” according to a press release. Dubbed the Wild River project, this additional land acquisition opens up “a natural bottleneck” for grizzlies and other wildlife.

“We know wide-ranging wildlife need space to roam, feed and breed to succeed. This linkage secures an area key to the success of grizzly bears here, which connects wildlife habitat into the mountainous region across this critical transboundary area,” said Kim Trotter, U.S. program director at Y2Y. “This is a win for bears, other wildlife, and people. We’re thrilled to work with partners such as Vital Ground and see this project advance.”

According to VGF, the Wild River area is considered “a crucial habitat connection,” especially for the Cabinet-Yaak grizzly bears. As goHUNT previously reported, the Cabinet-Yaak grizzly bears retained federal protections last year, which reversed a 2014 U.S. Fish & Wildlife Service decision, as the small population is only about 40 to 50 bears strong.

This land purchase ensures that suburban development and further encroachment on this key wildlife corridor will not happen. The project will also target the quarter-mile of riverbank and adjacent wetlands along the Kootenai River in order to restore them to quality habitat for other federally endangered species like the white sturgeon and bull trout.

“This collaboration stems from consultation with multiple state and federal agencies including Montana Fish, Wildlife and Parks and the U.S. Fish and Wildlife Service, and supporting those agencies’ wildlife recovery goals is designed into this project,” said Ryan Lutey, VGF executive director. “Following the acquisition, the partnership will continue investing in restoration projects to improve habitat and promote security for the several sensitive species benefitted by the effort.”