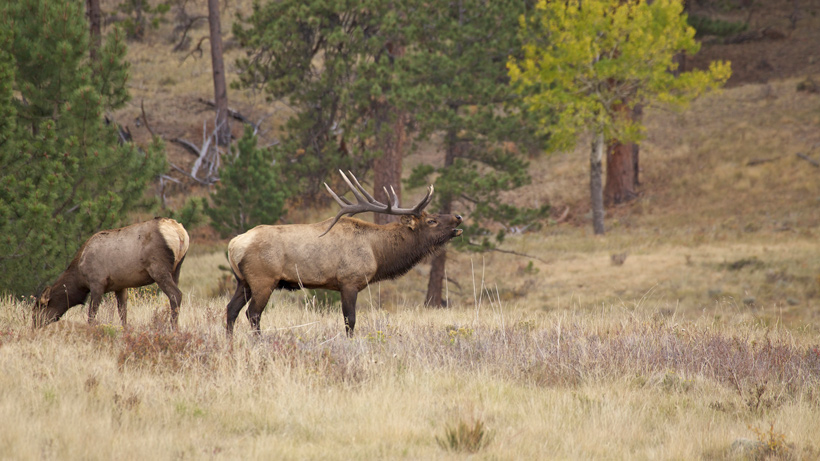 A repeat elk poacher from Idaho just lost his hunting license for the rest of his life. Bart Rhead, who pleaded guilty to poaching several bull elk – including one that measured 363” Boone and Crockett – illegally killed the animals with a rifle during closed and archery only seasons. Idaho Department of Fish and Game (IDFG) officers investigated Rhead following a report from a concerned sportsman “who heard a gunshot and saw a large bull elk go over a ridge” in Soda Springs last September, the Idaho State Journal reports.

Rhead then used a bulldozer to collect the poached elk and relocate it to his property where IDFG said he removed the antlers, ivory teeth and hide, leaving the rest of the animal to waste. Soon after, officers searched Rhead’s property, seizing the antlers; the wasted elk carcass was discovered “wrapped in a tarp and pushed off the side of a hill,” according to the Idaho State Journal. While searching Rhead’s property, IDFG also found a feed station complete with overhead light, mineral tubs, a water trough and alfalfa cubes – all of which is illegal to use for hunting big game in Idaho.

Three bull elk and one mule deer buck that Rhead had mounted in his home were also illegally killed. All were confiscated by authorities. While he received a more lenient punishment because of a plea agreement, Rhead was still sentenced to 90 days in jail (60 days suspended) and 120 hours of community service. He was ordered to pay $12,650 in reimbursement to the state, lost hunting and trapping privileges for life and was required to forfeit his hunting rifle.