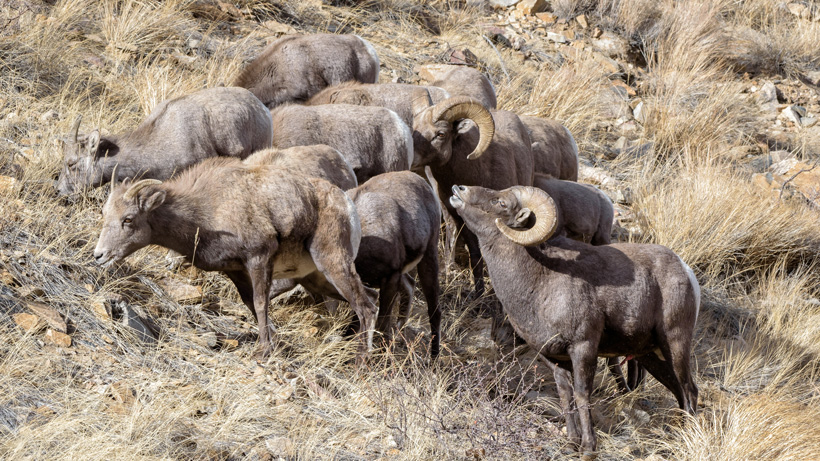 A new University of Wyoming (UW) study suggests that bighorn sheep rams could grow bigger horns if more ewes were hunted. The research, which analyzed hunting data from 12 states and Canada, was recently published in The Journal of Wildlife Management. Few states, including Wyoming, permit female bighorn sheep hunting; however, researchers say that harvesting ewes may actually “be one of the most effective ways to increase the number of trophy rams in North American bighorn sheep populations.”

Lead author Kevin Monteith, assistant professor in UW’s Haub School of Environment and Natural Resources and co-author Tayler LaSharr, a UW master’s degree student, writes, “Given the hyperbole surrounding trophy management and big horns, we suggest the importance of females in the management of mountain sheep has been largely forgotten.”

They go on to suggest that harvesting female bighorn sheep would create beneficial nutritional conditions for the remaining members of the population. Forage would be plentiful for rams and their mothers, which researchers found “to be more important than genetics in producing rams with large horns,” according to a press release.

“If mom is in poor nutritional condition and she can barely pull off provisioning her young male, that’s going to set the trajectory of growth of that male through his lifetime,” Monteith told Wyoming Public Media. “And even if things get much better for him thereafter, he won’t necessarily experience those benefits thereafter. It’s termed a negative maternal effect that can be life lasting for that individual ram.”

Traditionally, bighorn sheep tags target rams. Switching tactics to include female bighorn sheep may receive negative attention because, according to Wyoming Public Media, many hunters “believe horn size is genetic” and the size of the bighorn population is dependent upon the number of females within it. This recent study contradicts that long-held opinion.

“It’s an important step forward in understanding that it’s not just genetics that is influencing horn size,” LaSharr, co-author of the paper, told Wyoming Public Media. “And so we’re working on some other analyses now that looks at how harvest is influencing that and how nutrition during those different stages of life, particularly the year before an individual is born, can influence the lifetime horn size of the ram.”