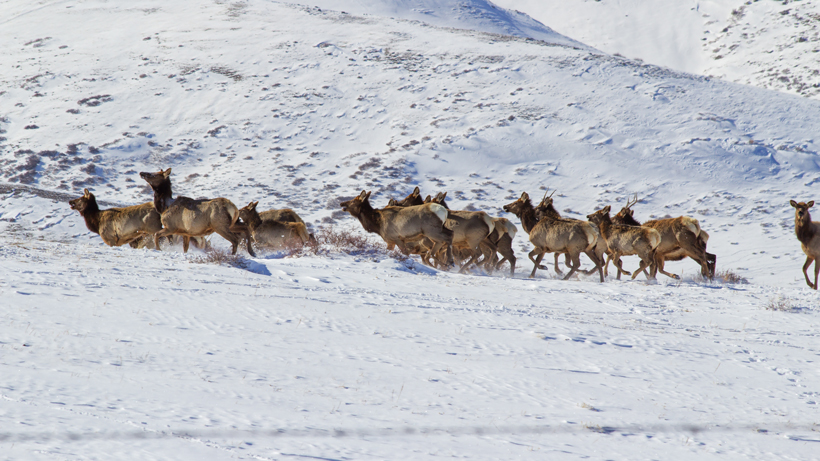 The Idaho Department of Fish and Game (IDFG) is still experiencing backlash following the lethal removal of 206 elk for a depredation study last summer. IDFG used sharpshooters to kill elk north of Shoshone and across the Magic Valley region to change their behavior and force elk to leave private property. However, once the agency released this information, social media erupted with fury between both hunters and non-hunters. Last week, several dozen hunters met at the Rosenau Funeral Home to “brainstorm solutions and ask Fish and Game about its depredation program,” the Idaho Statesman reports.

“The rules can be changed,” said hunter and meeting organizer Byrd Golay. “The state of Idaho better get it right.”

Over the past 30 years, more elk have congregated in Idaho’s agricultural areas, resulting in crop and property damage and leading to increased issues with ranchers and farmers. This is because of the rise in Magic Valley dairy production, which means growing more corn to support more cows and creating the perfect place for elk to thrive thanks to easy access to food and water. Elk numbers have also grown since they’ve moved into northern Nevada, crossing over to southern Idaho, according to the Idaho Statesman. However, in other areas of the state, herds are declining, which makes the killing of over 200 elk controversial.

Part of the problem stems from legislation from 1990 that requires IDFG to “compensate landowners for damage that wildlife inflicted on their crops,” according to the Idaho Statesman. While the crop damage claims were minimal at first, because of the growth in the Magic Valley dairy industry, that has changed significantly. In 2015, IDFG paid four claims totaling $69,000; in 2019, the agency compensated 150 claims for a total of $1.546 million. Last summer’s depredation cull targeted the landowner with the largest claim last year -- $1.1 million – and IDFG killed 108 of the 206 elk on that property.

IDFG Magic Valley Regional Supervisor Craig White says that the depredation removal worked because this year, “the claim on that same property was under $100,000.”

Regardless of the possible benefit of removing so many problem elk in specific areas of the state, hunters argue that IDFG could have worked more closely with them, especially considering that the majority of IDFG’s budget “comes from the fees paid by hunters, anglers and trappers,” according to the Idaho Statesman.

Further, those at the meeting last week argued that hunters should have access to the private land IDFG is clearing of problem elk since, essentially, they fund the agency and the agency pays private landowner claims.

“I think every person in this room wants a law stating that you do not get depredation money unless you provide public access,” said hunter Jevon Benson.