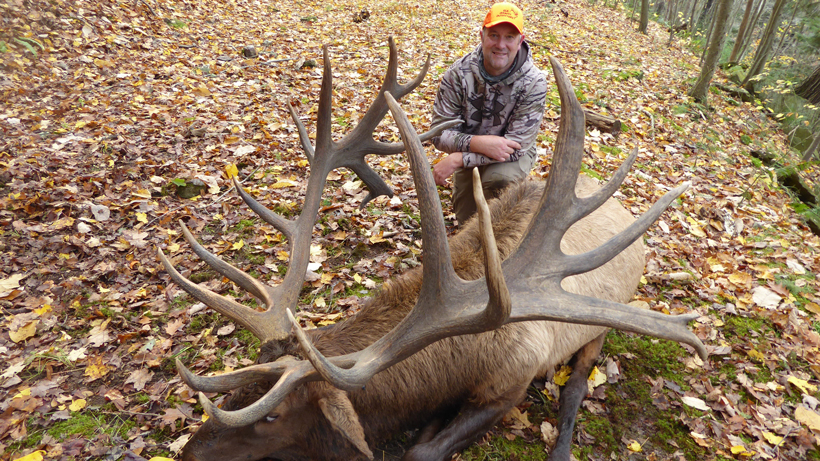 Duane Kramer is a lucky guy. Not only did he win the 2020 Keystone Elk Country Alliance Raffle, which meant he got a chance to hunt a Pennsylvania monster bull, but he actually harvested a potential new state record. Kramer, who lives in Bellingham, Washington, hired Elk County Outfitters to help him locate a big bull during this memorable hunt last October.

And, boy, did he make a good decision. While he was out in the field, he said he had plenty of opportunities at bulls over the 420” range. “There were enough 400-class bulls running around there that it wasn’t a question of getting a 400-inch bull, but a matter of how far over 400 we could get,” Kramer told Boone & Crockett.

While he was only 18 yards away from the bull he would eventually harvest, he wasn’t close enough for an ethical shot because of the harem of cows milling around him. “I thought he was going to come right for us because we were standing right in the game trail,” said Kramer. “I kind of wish I had taken my bow.”

Fortunately, he got another chance just a few days later, killing the monster bull at 70 yards with a clear shooting lane, according to a press release. It took only one shot with Kramer’s 7mm Dakota and a 180-grain Berger bullet.

Now, it will be up to the judges to determine if Kramer’s bull is the new nontypical record for the state. The final measuring and scoring of Kramer’s bull will occur this July during the Boone & Crockett Club’s 31st Big Game Awards.