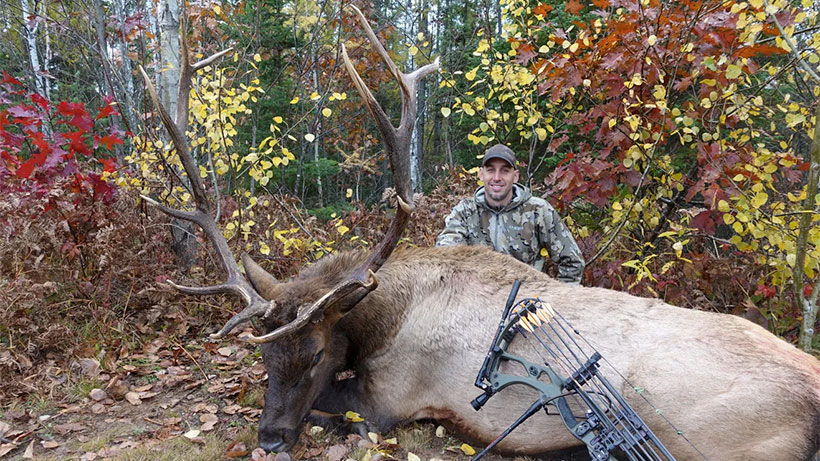 With one-in-a-million draw odds, this lucky bowhunter not only had a chance to bowhunt a Wisconsin elk, but the one Dan Everson arrowed was a 6x7 bull with a green score of 283 7/8”. Everson was one of three hunters to draw a 2022 Wisconsin elk tag out of the 25,742 hunters who applied for the chance. And it all began while the avid big game hunter was on a grizzly bear hunt in June when his wife called to notify him that he had, essentially, won “a Wisconsin hunter’s version of the Megabucks lottery,” according to the Milwaukee Journal Sentinel.

“I was super surprised and very lucky to get it,” said Everson, adding that “Bowhunting is my life.”

To date, he has hunted in over a dozen states and across Canada in an effort to fill the “Super Slam,” which equals taking all 29 Pope and Young Club evaluated species with archery equipment. When he drew the coveted Wisconsin elk tag, he knew he’d only take a bull with his bow.

As GOHUNT previously reported, Wisconsin’s multi-year elk translocation project helped reestablish the animals to their once-native state and was a collaboration between Kentucky wildlife officials and the Wisconsin Department of Natural Resources. Now, the northern elk herd, which stretches across Ashland, Bayfield, Price, Rusk and Sawyer counties, numbers over 200, showcasing a successful translocation project.

For the 2022 season, the state only offered eight tags this year. The fourth won was raffled off by the Rocky Mountain Elk Foundation and the last four were given to Ojibwe tribal members “in accordance with their treaty rights.”

To fill his tag, Everson headed to Clam Lake, where he and a few friends located a herd of about 30 elk on Oct. 13 that included his first choice: the 6x7 bull. While he has already taken Roosevelt and Tule elk, his Wisconsin tag would be filled with his first Rocky Mountain elk, according to the Milwaukee Journal Sentinel.

After several days, Everson was able to get into position and wait for the opportunity to present itself. Finally, the bull stood and Everson shot him broadside at 60 yards. While the bull initially bolted, Everson found him only 100 yards away.

This bull fills Everson’s 25th species on his quest to fill the “Super Slam.”  He is also the first “modern era” Wisconsin bowhunter to harvest a bull elk during the regulated season.

Congratulations, Dan Everson, on an impressive and successful hunt!