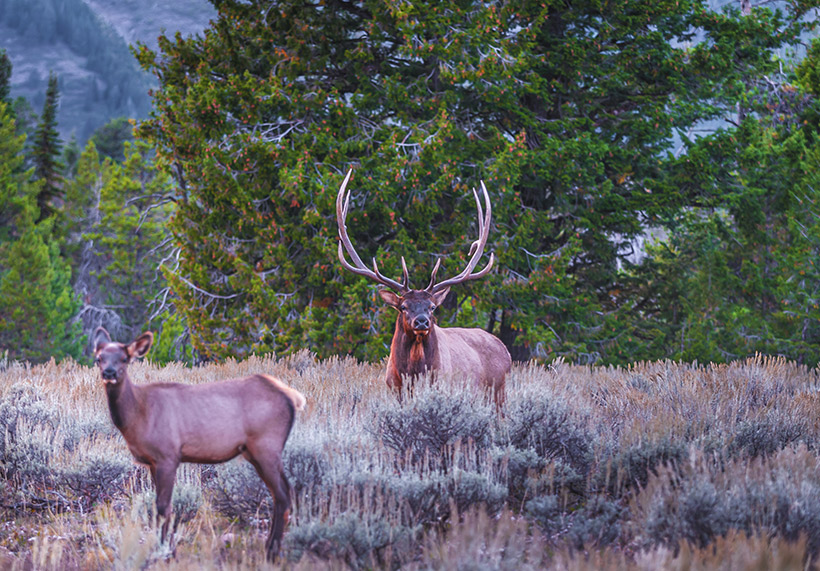 State biologists conducting routine ungulate counts in the Teton Wilderness this summer are reporting a record number of antelope and a substantial increase in elk calf ratios.

The antelope population in Jackson Hole has remained consistently high since 2012, when the record was previously set.

“We counted a total of 415,” Wyoming Game and Fish Department biologist Aly Courtemanch told the Jackson Hole News and Guide. “That’s slightly higher than last year and the highest we’ve ever counted.”

The numbers are used to determine hunting quotas and seasons for the following year. This a trend survey and is not considered an actual census count of the population. Regardless, the data is welcome news to conservationists and sportsmen alike.

The Jackson Hole antelope find their winter range in the Upper Green River Valley of Wyoming. With the return of spring, the ungulates will begin traveling north as the follow the retreating snow as it unveils new, green growth. Trekking along the Green River, they pass through the ‘Funnel’ — a narrow water gap cut by the Green River — and towards the hydrologic divide between the Green River and the Gros Ventre River. Crossing the divide, the band of antelope will travel down the Gros Ventre valley towards their destination — their summer range in Jackson Hole and Grand Teton National Park. The migration is more than 100 miles.

In Jackson Hole, the does will give birth and spend the summer raising their fawns. With the approach of fall, the antelope begin to gather once again, anticipating their return to their winter range in the Upper Green River Valley winter range. They cannot survive the deep snows of a Jackson Hole winter. The return journey is filled with a great deal of urgency, as the antelope must cross the Gros Ventre/Green River divide before snow obstructs their path.

Biologists refer to this migration route as the “Path of the Pronghorn.” It is one of the longest large mammal migration corridors remaining in North America. Over the past several years, conservationists have noted that the migration has been jeopardized by large-scale energy development, increasing private land development and imbalanced predator/prey relationships.

The biologists also reported healthy fawn ratios. This year, Courtemanch counted 47 fawn antelope for every 100 does, a ratio that she said is consistent for the herd. Antelope in the Pinedale region, on the other hand, produce fawns at a ratio around 70 to 80 fawns per 100 does.

The regular summer count also turned up good news for the migratory elk in the Teton Wilderness. The elk calf ratios, used as a gauge of the health and projected growth of elk herds, were up significantly.

The elk count, conducted by air, reported 30 calves for every 100 cow elk.

“We had really good calf-cow ratios this year,” Courtemanch proclaimed. “That’s the segment of the herd that generally shows very low calf production.”

Nearly 10,000 elk winter in the National Elk Refuge in Jackson Hole. The elk begin their migration out of the high meadows in the fall, typically after the first snow storm. They tend to stay in the refuge through the spring, when food becomes more plentiful.

Biologists say that increased predation rates, severe drought and the physical demands of migration have all impacted the number of elk that are able to venture out of Jackson Hole each summer.

“When some of the first collaring efforts started on the National Elk Refuge a couple of decades ago, 60% of the elk migrated to the Teton Wilderness and southern Yellowstone,” Courtemanch explained. “More recent collaring shows that 40% migrate to Yellowstone.

Given these statistics, the 2014 summer fawn ratio is encouraging news.

Biologists also conducted formal moose counts by air. Courtemanch noted that they counted solid numbers of other animals as well.

“We saw quite a few mule deer and actually some really, really good-looking buck mule deer,” she remarked. “We had a really good summer for moisture this year, and we’re seeing a lot of elk and deer that have really good antler growth this year.”

The rifle season for elk hunting in the Teton Wilderness kicked off last weekend, and the hunt will be on in most southern parts of Jackson Hole starting Friday. A limited antelope hunt in the Gros Ventre drainage — limited to just 15 animals — began September 10 and will end October 31.