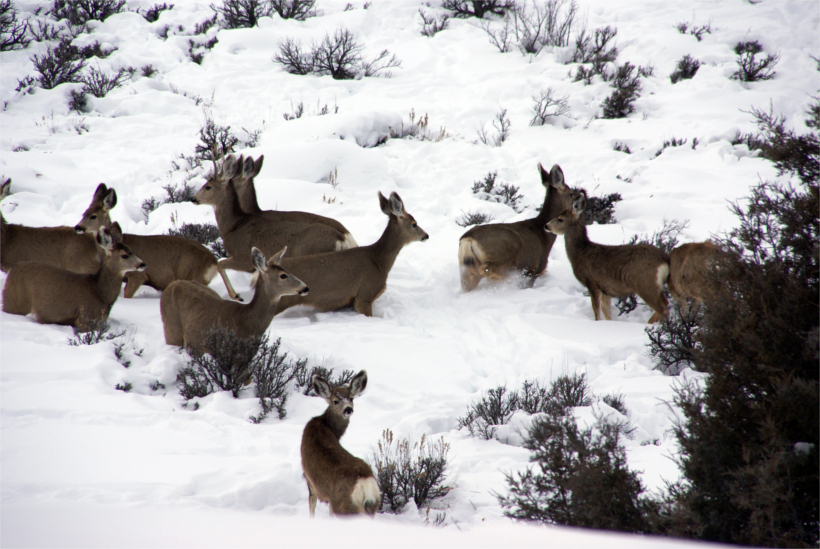 After multiple mild winters that left plenty of food to forage, Colorado mule deer are now facing incredibly harsh conditions that have Colorado Parks and Wildlife (CPW) carefully monitoring the situation. This is the most brutal weather wildlife have experienced in nearly 35 years, with record temperatures below zero and deep powder snow on top of hard ice pack, creating limited food options.

Moffat, Routt, Rio Blanco, Eagle, Garfield and Jackson counties have all been impacted by the weather and wildlife managers believe that Grand and Summit counties are next. In an effort to help ungulates stay nourished and hopefully limit herd mortality, CPW has established a limited feeding program. It also keeps deer, elk and moose away from cattle feeding stations, according to the Summit County Citizens Voice.

Ron Verlarde, a CPW Regional Manager, noted that “[W]ildlife has been experiencing and surviving severe weather for eons without human intervention, so it’s important to have the proper perspective.”

Feeding stations can only be established by CPW officials, including those in areas where Chronic Wasting Disease has been reported. Verlarde says, “We understand that people want to help in situations like these. But feeding should only be done by professionals, if it’s done at all. If people take matters into their own hands, it will likely do more harm than good, leading to wildlife deaths, and can also result in citations and fines.”

While Colorado is home to many different species, ranging from the Greater Sage Grouse to elk to antelope, officials are most concerned with the impact of these conditions on the already declining mule deer herds. Biologists anticipate that the current weather conditions will make deer numbers continue to drop, according to the Summit County Citizens Voice. In fact, in an effort to keep tabs on the dwindling numbers, CPW has collared several hundred does and fawns to track mortality and, for now, estimates that mortality is currently at less than 10%.