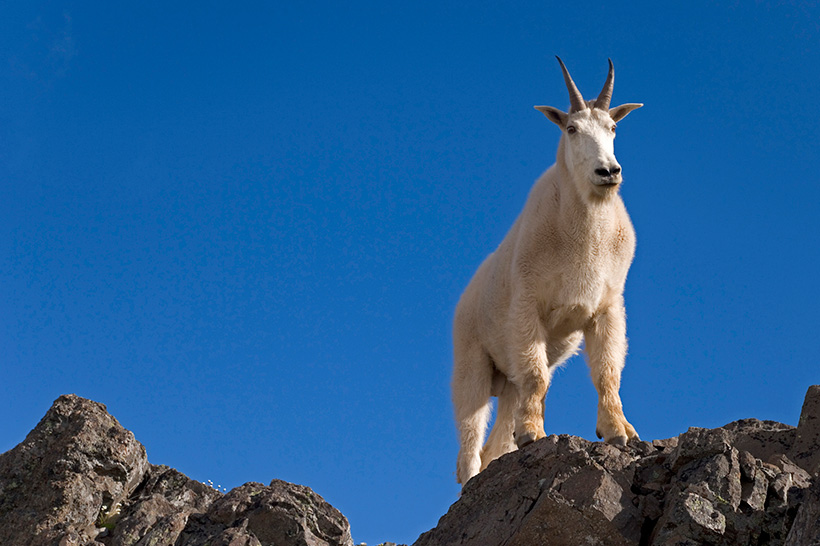 In a remote area in southeastern Utah, 18 Rocky Mountain goats stand at the center of a heated debate raging throughout the state.

Last fall, Utah’s Division of Wildlife Resources (DWR) moved more than 20 mountain goats from the Tushar Mountains to the La Sal Mountains east of Moab. By doing so, the DWR sparked the latest round of debates in the ongoing conflict over wildlife and federal land management across the western United States.

Environment and Energy Publishing recently published an article on the controversial land-use debate.

Ever since Utah Forests Program Director, Mary O’Brien, learned about the transplant, she has been rallying the support of hikers and conservationists to protect the delicate alpine terrain and its plants from the goats. Of greatest concern have been the 10 highly sensitive and extremely rare alpine plant species, including the La Sal daisy that grows nowhere else in the world.

Conservation groups like The Grand Canyon Trust and the Wild Utah Project (WUP) maintain that the DWR introduced the goats before adequate data on location, quantity and condition of the plant species had been collected.

“We are concerned that DWR put the goats out on the La Sals without adequate baseline data on the existing environmental conditions,” said Allison Jones, director of the WUP.

Yet the DWR fervently maintains that the growing population of goats will have little impact on the ecosystem. They base this assessment on previous introductions in Utah’s Wasatch Front, Uinta Mountains and Tushar Mountains.

“In those areas, goats have had no impacts on the vegetation in those alpine and subalpine communities,” said Chris Wood, the southeast regional supervisor for the Utah Division of Wildlife Resources. “We are confident on the La Sals, that will also be the case.”

Wood adds that environmentalists will not be satisfied until goats are completely removed from the mountains, regardless of whether or not they damage the ecosystem.

O’Brien says that the recent transplant is part of a larger problem in which state wildlife agencies are running unchecked and are introducing animals to areas where they do not belong.

Caught in the middle of the DWR and conservation groups is the U.S. Forest Service (USFS).

The USFS has officially objected to Utah’s goat-introduction plan, but has agreed to work with both sides in order to accurately assess the goats’ environmental impact.

The DWR, however, believes USFS involvement is unnecessary, as the service has already relinquished "the primary authority, jurisdiction and responsibility to manage, control and regulate fish and wildlife populations on National Forest Service lands" in a memorandum of understanding between the two agencies.

"We'll always have a future of working with our federal partners, but I think we'll always be clear, though," Wood said. "In the United States, wildlife management is a state action; it's not a federal action.”

But O’Brien maintains that given the fragile nature of the La Sal landscape, the Forest Service has an inherent obligation to protect the ecosystem. She is calling for the USFS to begin with an evaluation of the goats’ impact under the National Environmental Policy Act (NEPA).

After almost a year waiting for a NEPA evaluation to address what the conservationists see as a “direct violation of Forest Service responsibility and policy,” Jones says it is time for the Forest Service to take action.

"We don't see how they can cover the impact on their watch without going through NEPA," Jones said. "That's just mind-boggling.”

The DWR, however, has not wavered, maintaining that they are merely carrying out their mission to sustainably maximize wildlife populations to create the most optimal experience for Utahns.

And for the DWR, establishing a goat population in the La Sals is an important part of the agency’s overall objective. After the bighorn sheep disappeared from the mountains in the 1950s, the DWR decided that mountain goats would be a suitable surrogate based on both habitat requirements and overlapping diets.

"We chose not to take bighorn sheep back there, but had we done that, that would have taken it back to how those plant communities were used historically," said Justin Shannon, a DWR biologist. "We were just trying to fill that niche.”

The DWR says that they have factored vegetation heavily into their management plan and have also considered the issue of wallows, areas where mountain goats clear vegetation for dusting themselves. The agency maintains that it is entirely committed to protecting sensitive species in the La Sals through nine long-term vegetation-monitoring sites set up around the time of the goats’ introduction.

"At the end of the day, if we don't have healthy habitat, we're not going to have healthy wildlife populations," Shannon said.

This past summer, though, after an outing with 15 botanists and volunteers, including O’Brien and local Forest Service biologist Barb Smith, WUP Executive Director Allison Jones reported evidence of hoof damage, erosion and wallows on all the rare species in the research area and beyond.

“And that’s just with 20 goats,” Jones said, noting that DWR is ultimately aiming to host 200 goats in the area.

Some conservationists argue that environmental concerns have been drowned out by the hunting majority.

The demand for hunting mountain goats always outweighs the supply, even with increased goat populations.

The fee for a tag — $413 for residents and $1,518 for out-of-state hunters — helps provide necessary funds for wildlife management. In fact, hunting and fishing licenses generate the majority of DWR’s revenue.

The DWR dismissed these accusations, saying that the proposal went through a number of advisory councils and votes. Shannon pointed out that the councils — 12 to 15 member panels in each of DWR’s five regions across the state — are purposefully “eclectic” groups that include representation from federal agencies, local government, agriculture, sportsmen and environmentalists.

"I think the [councils] and [Wildlife] Board members are genuinely trying to do what's best for wildlife, and I wholeheartedly believe that," Shannon said.