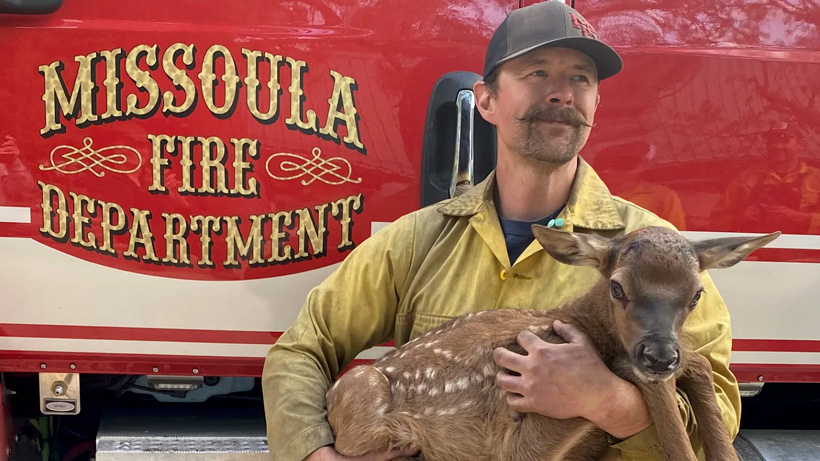 Wildfires continue to scorch the West and firefighters from all over the country are helping contain some of the largest blazes. Missoula, Montana-based firefighter Nate Sink traveled to New Mexico to help contain a wildfire that’s nearly 486 square miles and recently rescued an abandoned newborn elk calf that he found “amid the ashes,” according to National Public Radio (NPR).

"The whole area is just surrounded in a thick layer of ash and burned trees. I didn't think it was alive," said Sink.

The fire, which is one of the five “major uncontained fires” in the state, is considered one of the nation’s largest and continues to rage right in the middle of elk calving season.

A thorough search of the area didn’t locate the abandoned calf’s mother, which prompted Sink to take the 32-pound bull calf, which has been dubbed “Cinder,” to a ranch where it was transferred to a wildlife rehabilitation center in Espanola, just north of Santa Fe.

Veterinarian Kathleen Ramsey of Cottonwood Rehab has placed the bull calf, which was still young enough to have its umbilical cord attached, with another full-grown surrogate elk, according to NPR. Ramsey hopes to release Cinder into the wild in December once elk season has ended.  While it’s generally not a good idea to interact with elk calves this young, Sink’s quick thinking saved the young bull.

Here’s to a speedy recovery, Cinder!