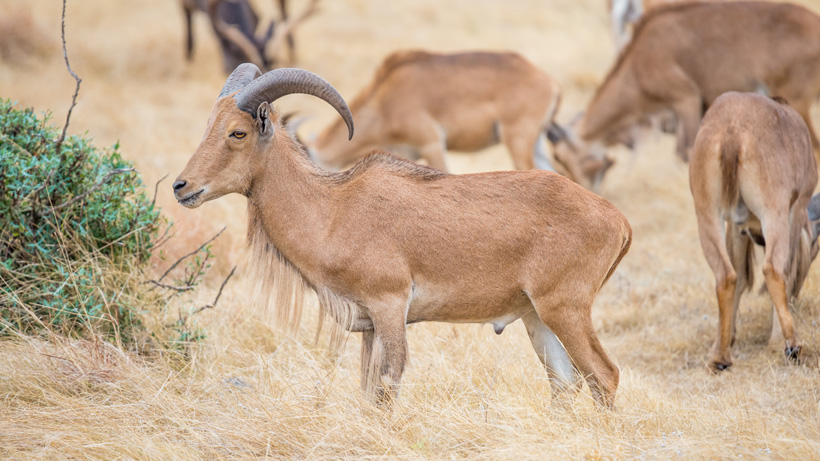 An African import has turned too prolific in Texas. Aoudads—also known as Barbary sheep—were brought to the Lonestar State in the 1950s as exotic game, but, now, according to Froylan Hernandez of the Texas Parks and Wildlife Department (TPWD), the non-native species has overpopulated to the point of hurting native desert bighorn sheep.

Hernandez is TPWD’s desert bighorn sheep program leader and spends time in a helicopter every summer, counting bighorn sheep. Unfortunately, he tends to see more aoudads than sheep during his aerial tally because the wild populations have thrived in the “dry, rocky terrain”—a terrain that is also home to roughly 1,500 native desert bighorn sheep thanks to careful recovery efforts orchestrated by the state, the Texas Standard reports.

“It’s not uncommon for us, when we’re flying, to see groups of two and three hundred,” said Hernandez. “They can pose a great threat to bighorns, not just [from] a competition-for-resource standpoint but also from a disease-threat standpoint.”

Because of the speed at which aoudads have flourished, they’ve become “a speed bump on the desert bighorns’ road to population growth,” according to the Texas Standard. Coupled with competition for habitat, several aoudads recently tested positive for the strand of bacterial pneumonia that has caused massive die-offs in bighorn sheep populations across the West.

This is why Hernandez will often cull aoudads with landowner permission while he’s completing his bighorn sheep aerial surveys. However, not every landowner is keen on having Hernandez remove the invasive animals because they’ve become popular among hunters—and hunters will often pay guides thousands of dollars for help in locating a trophy ram. Ans a portion of that money goes back to the landowner.

“A lot of that’s because of the publicity they’ve gotten over the past five or 10 years. They weren’t really looked at as a sporting animal that much; they weren’t really known to most people,” Bob Daugherty told the Texas Standard.

Daughtery has been guiding aoudad hunts on land near Presidio for the past nine years. Because the animals are considered invasive, Texas does not have a limit on the number of aoudads a hunter can kill; however, because of the tough terrain, many hunters hire guides like Daughtery.

“You know, I’ve been guiding all my life, and next to calling in bugling elk, aoudad – that’s my favorite hunt. And then, when a guy hunts them, I probably get a 70% percent return rate,” said Daugherty.

Because of this newfound interest among hunters—and the economic gain for guides and landowners—Hernandez believes that aoudads will never be fully removed from the state, despite the threat to native desert bighorns.