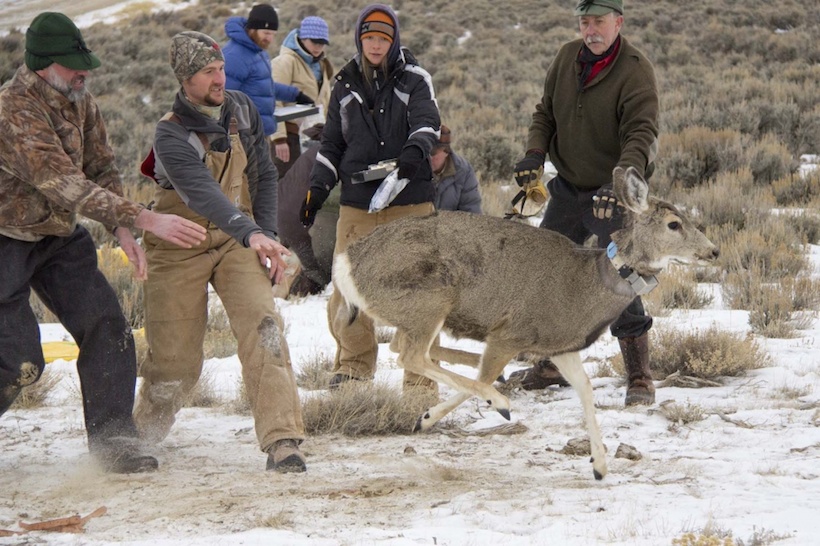 As energy development expands, habitat for big game faces disturbance, conversion and fragmentation. This places a significant amount of stress on wildlife and raises serious questions about effective mitigation practices.

Nearly 15 years ago, energy development began growing in an area of southwest Wyoming called the Pinedale Anticline. It was a high-altitude sage-brush landscape, ideal for mule deer habitat.

Yet the region also had another valuable asset — it was one of the largest gas reserves in the United States. The natural resource would not only help the state earn hundreds of millions of dollars in tax revenue, but would create substantial employment opportunities.

However, where Wyoming benefited, the deer suffered. Between 2001, when natural gas development was initiated, and 2011, the mule deer populations in the Pinedale Anticline plummeted by 60%.

The impact on other big game species remained uncertain until recently. New data by a research team from the University of Wyoming suggests that elk respond to energy development much like mule deer do.

The study focused on 59 cow elk in the Fortification Creek Planning Area, a 100,655-acre region of Campbell, Johnson and Sheridan counties that is managed by the Bureau of Land Management. From 2008-11, more than 700 coal bed methane wells were placed in the area.

The herd in the Fortification Creek region does not migrate from the area, making the animals an ideal candidate for understanding behavioral adjustments in the face of energy development.

Researchers found that the elk in the region lost 50% of their habitat, spurring the animals to relocate further away from zones with developing infrastructure. Experts had long theorized that this would have been the case, but now they have scientific evidence.

“They changed their habitat selection pattern accordingly,” said Jeffrey Beck, an associate professor of ecosystem science and management at the University of Wyoming. “They quit using their typically high use areas because they were no longer effective habitat. This is pretty common in sage grouse and pronghorn. It’s common for species to just avoid infrastructure, roads especially.”

This loss in habitat places a significant amount of stress on the elk, which can have devastating effects during the harsh winter months when the animals need to conserve fat reserves for survival.

The impacts of energy development on wildlife may not necessarily be ground-breaking news. But it has helped to increase awareness and to encourage application of the research.

In recent years, some companies have agreed to as well as implemented new strategies to help the mule deer in the Pinedale Anticline region. One such company is using a liquid gathering system to pipe liquid byproducts away rather than relying on tankers, which ultimate decreases disturbances in the area. Directional drilling has also reduced noise and activity on the surface.

In the Fortification Creek region, Anadarko Petroleum has spent more than $500,000 on monitoring the regional elk herd. The company currently restricts traffic and the timing of maintenance and other actions to strategic times that are meant to decrease the disturbance to the animals.

“We strive to protect the environment and habitats where we live and work,” said Anadarko Petroleum Spokeswoman, Robin Olsen. “A vast number of our 700 Wyoming employees are outdoor enthusiasts too, and we want to protect Wyoming’s unique character and ecosystems.”

Unfortunately, cooperation and collaboration isn’t always so smooth. This is particularly true in areas where companies hold existing mineral rights. The state has restricted power on development in those regions, but can require operators to implement conservation plans to mitigate the adverse impacts on local wildlife.

“Some companies are great to work with and understand and have the technology and funding to do it while others don’t quite have the support mitigating those impacts,” says Wyoming Game and Fish Habitat Supervisor Mary Flanderka.

And as the United States continues to expand its energy development projects, mitigating the impact may just not be enough. Even though studies may suggest that big game can coexist with energy development and infrastructure, it is becoming increasingly stressful for both wildlife and companies alike.

In the case of Fortification Creek, the elk adapted to the energy infrastructure by shrouding themselves in the protection of a Wilderness Study Area (a 12,000 acre parcel of land set aside by BLM were development is prohibited) during the day. This area provided the elk with a critical undeveloped sanctuary amid the disturbance, fragmentation and activity caused by the energy development.

This, however, is extremely rare. The majority of wildlife will not have access to a refuge like the Wilderness Study Area, especially given the rate of energy development expansion.

“The pace of energy development sometimes swamps everything,” Beck said. “It’s important to have that ability for an animal to have a place to go where they aren’t going to be disturbed, and then they are able to persist at least to some extent in a developed area.”

When wildlife does not have a reprieve, they are forced to uncertain habitats, putting them at great risk to predators, starvation and significant amounts of stress.