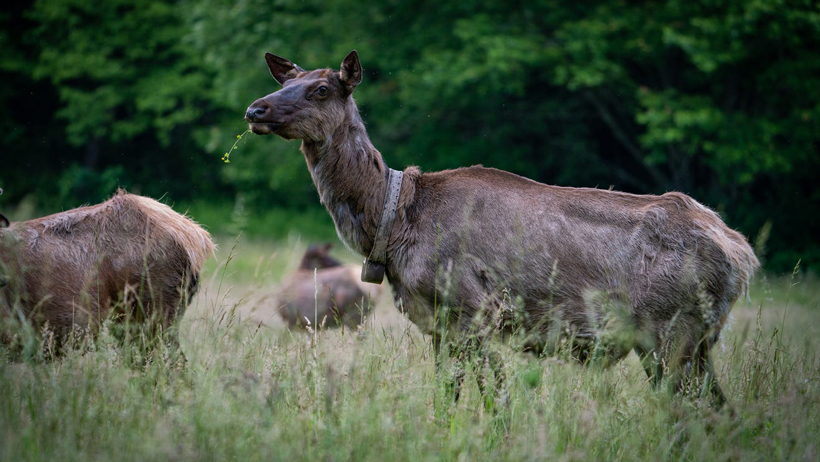 A group of elk in the Cataloochee Valley area on the North Carolina side of the Great Smokey Mountains National Park. Photo credit: Joye Ardyn Durham

It took about 20 years, but elk have returned to the Cataloochee Valley in North Carolina. Once native to the Tar Heel State, eastern elk vanished in the 1800s due to human encroachment on key habitat. However, now, while exact numbers are still to be determined, elk are back in the Great Smoky Mountains in Southern Appalachian, the Citizen Times reports.

Wildlife biologist Joseph Yarkovich has been involved with the project since its beginnings and hopes to one day “have one large, contiguous population throughout the East Coast again,” but adds, “that’s still way, way down the road.”

For now, those involved with the elk recovery project are hoping to obtain an accurate population count.

“What we’ve been doing up until now is conducting a minimum count,” said Yarkovich. “The park in collaboration with the Eastern Band of Cherokee Indians and the North Carolina Wildlife Commission will coordinate for three days in a row to count as many elk as we can see and come up with a minimum estimate for the population.”

However, that will be tricky due to the dense forests that span the western part of the state into Tennessee.

“Basically, the way you typically survey elk populations is based on western landscapes and methodologies where you have really high sightability,” said Yarkovich. “Those methods really aren’t as effective here in the Southern Appalachians where everything is just so thick.”

So, they’re looking at a new way of tallying – and tracking – wildlife.

“What we’re looking at now is a study using elk fecal DNA,” said Yarkovich. “It consists of walking transects all over Western North Carolina for three years, finding elk pellets, and swabbing them for DNA. Those samples can then be sent off for genetic analyses down to the individual level, which will help us capture records of a lot of the animals that we’re not seeing.”

There’s about 400 transects that park officials will study that include miles of off-trail areas. However, while the DNA-based counting system is “labor intensive,” biologists believe the results will be worth it as they will be able to see “detailed information…for a reintroduced population that is still relatively fragile,” according to the Citizen Times.

“Twenty years of elk back on the landscape can seem like a really long time, but when you look at the big picture, it’s still not a big population,” said Yarkovich. “Smaller elk populations can be really sensitive to disease, changes in the environment, and changes within their own group dynamics.”

If successful at uncovering a piece of the “region’s ecological puzzle,” Yarkovich believes other states will try the method, too.

“If this project works as well as we hope, I would expect other states like Tennessee, Kentucky, Virginia, and Pennsylvania to pick it up too,” said Yarkovich. “That’s a big step toward restoring a healthy, self-sustaining herd for Southern Appalachia.”