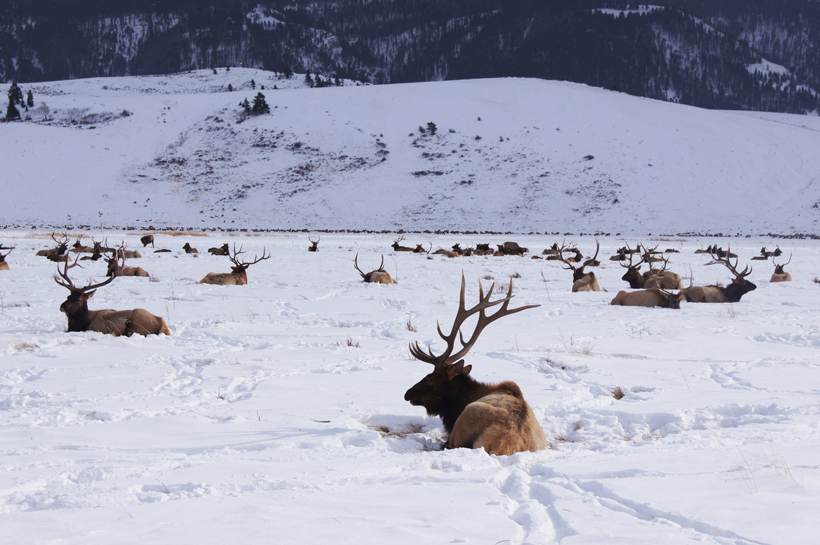 The good news is that Jackson Hole elk populations are thriving. The bad news is that too many have decided to winter on the National Elk Refuge instead of the Gros Ventre River drainage, which means that not enough elk consider public land home.

“For the entire herd we’re right there, numbers-wise, but we continue to have challenges trying to distribute elk where we’d like them to be during the wintertime,” says Aly Courtemanch, the Wyoming Game and Fish biologist in charge of the Jackson Elk Herd.

Officials wrapped up aerial counts last week and found 10,633 elk using feedgrounds and foraging across native range. To account for those that were missed, biologists bumped the count up to 11,000 – exactly where herd numbers should be. The problem, however, is not low numbers, but where the elk have decided to live. According to Jackson Hole News & Guide, there is a high number of elk located on the National Elk Refuge and only one-third of the preferred number of elk in the upper portions of the Gros Ventre River drainage. Similar healthy herd counts were reported this past summer in the region.

“The Gros Ventre really dropped quite a bit this year in terms of how many elk there were,” says Courtemanch. “What we think is going on, based on past movements of elk, is that most of those elk probably came down to the National Elk Refuge.”

The question is where the extra elk have come from. While some Gros Ventre elk do migrate to the Refuge over the winter months, GPS collar data does not show a mass movement among the herd and only two of the 10 tracked Gros Venture elk were even discovered on the refuge.

“We don’t have any really strong radio collar data or observational data to pinpoint exactly where those elk went,” says Courtemanch, who suggests that high birth rates could lead to a surplus of elk on the refuge. She adds that the number of bull elk could be caused by an unsuccessful bull elk hunting season last year. Much of the herd has also benefited from a mild winter that allows for easier foraging. Regardless of why the elk are there, hopefully more elk will migrate back to public land before the hunting season is underway.