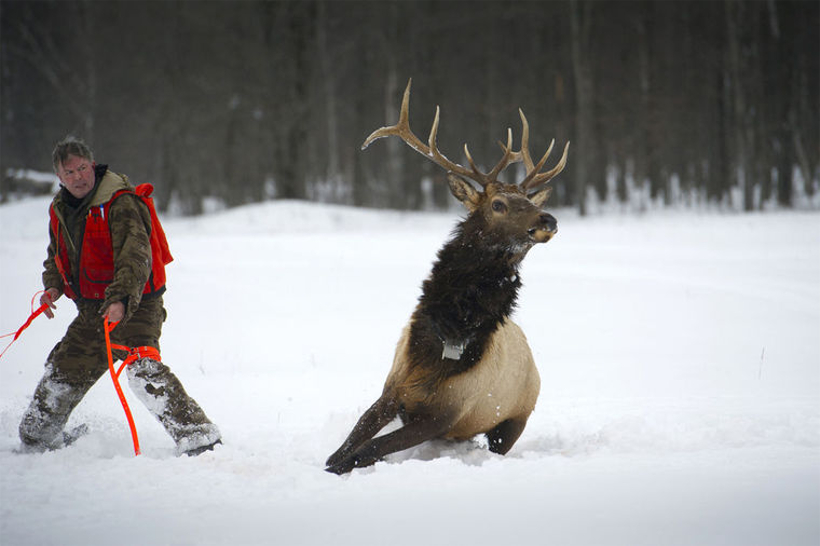 Elk are rebounding in Michigan. After a period of steady decline due to poaching and habitat issues, officials now estimate that 1,371 elk roam the state. With numbers up, officials want to keep it that way. This is why the Michigan Department of Natural Resources (MDNR) and Michigan State University (MSU) have teamed up to study elk, specifically their interaction with people and their use of habitat.

Researchers plan to collar 40 elk –20 cows and 20 bulls – and will specifically target animals within the Pigeon River Forest area. This is the first time in 12 years that elk within the state have been collared for research.

“The elk range has expanded over the years, and they spent more time outside their core range than previously — and one of the potential causes of that is the increased recreational use on state land, and how it’s causing elk to move away (and) avoid state land,” says MDNR field operations manager Brian Mastenbrook. He says that researchers plan to bring horses and mountain bikes to areas where they know elk are in order to study these impacts specifically on the animals.

The $500,000 study, which is funded by a MDNR wildlife division grant, will continue over the next few years.  MSU graduate students will help track the collared elk through the GPS data and participate in fieldwork.

“The goal of the project is to evaluate the influences of and the distribution of habitat quality has on elk and (their) behaviors as well as how recreational use throughout the elk range also influences their movements and behaviors,” says Rick Campa, a MSU professor of wildlife ecology and principal investor with this project.

Hunters are being asked to avoid harvesting collared elk during elk season. While they won’t be penalized, it does mean that research will be interrupted and more elk would have to be collared to continue.