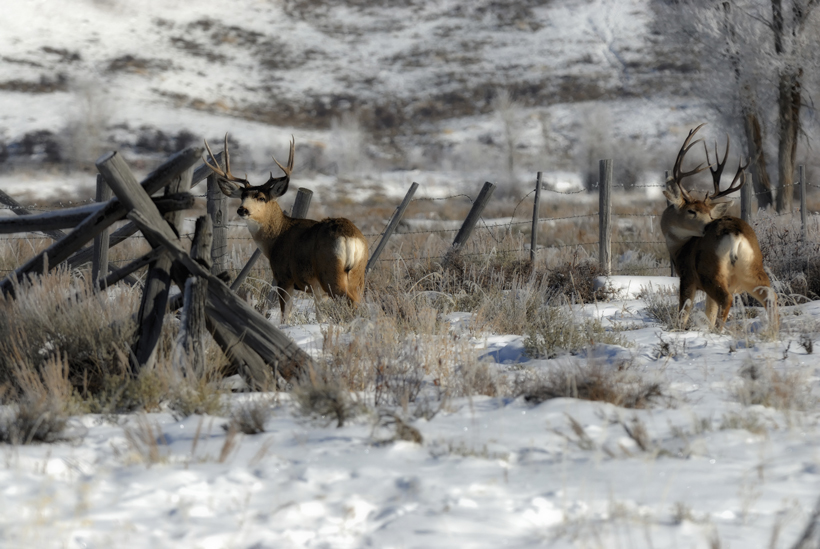 Wyoming Game and Fish officials are counting deer in Cody and administering an annual survey that could help the city determine how the herd is managed.

While deer numbers across the western United States may be down, Cody has an urban deer population that seems to be holding close to steady and doing a lot of damage to yards and gardens. Some residents have taken a liking to the animals, enjoying their presence, but others in Cody consider the deer a nuisance and want them gone immediately.

With the city divided, government agencies have stepped in to find a solution. Beginning in early December Game and Fish staffers will spread out around Cody to count mule deer and administer a survey that will help officials assess the best way to manage the herd.

This year is particularly important in the city’s deer management approach as it marks the end of a five-year monitoring period of the local herd. It’s what parks and recreation director Rick Manchester called the “wait-and-see” cycle of study the city’s Urban Task Force awaited.

In 2009, officials administered the first annual survey to assess the opinions about the mule deer from Cody residents. By a 51-49 margin, Manchester said feelings slightly leaned toward, “there is a deep problem.”

In 2011, the city sent out more than 5,000 surveys, 1,546 of which were returned. The results indicated that 56% were concerned about the city’s population of urban deer, while 44% said they had no concerns. Yet when asked if they would like the city to take action to reduce the herd, 50% of the respondents said yes and 50% said no.

Such even splits have made it difficult to find a consensus, and ultimately, challenging to find the appropriate solution.

Some of the possible approaches to deer management include: damage control by the property owner, euthanasia, contraception, hunting or sharpshooting.

Techniques used in other communities to cull urban deer herds have also been discussed, including those in Helena, where the city spends upward of $69,000 a year to reduce its population of mule deer. However, the cost of such a program makes this an unlikely possibility for Cody.

While the best strategy for managing the Cody herd has been a source of contention in the city, the one thing that everyone can agree on is that no action should be taken until officials have an accurate count of the number of deer.

Those numbers suggest that the population is “fairly static,” and Osterland does not expect to see any substantial changes in results in December.

Yet once the mule deer count has been completed and the numbers filed in a report, Manchester says that the Urban Task Force will review it carefully before sending a recommendation to the City Council for action.

According to Manchester, it really comes down to two options: ”Do we cull the herd or do we do nothing?"