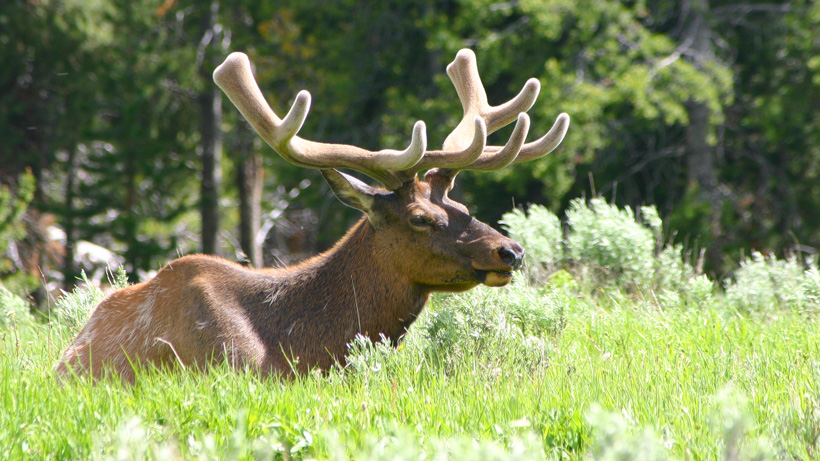 A Colorado bull elk is in trouble due to a unique predicament: he has a tire stuck around his neck. Colorado Parks and Wildlife (CPW) shared video footage of the elk caught on trail camera near Conifer earlier this month – and CPW agents are trying to catch him to remove the tire from his neck, CBS Denver reports.

Officials first spotted the elk last July during a mountain goat and bighorn sheep survey on Mount Evans, according to Fox News. Since then, officials have been searching for him and recently shared the video footage to request the public’s help in locating the animal.

“It doesn’t look like it’s been suffering,” said CPW spokesperson Jason Clay. “When you get anything caught up around the antlers or the neck like that, what you worry about is: can they still move along without getting caught up on anything, can they still eat and forage and would they have any obstructions with their snout, breathing? Anything like that.”

However, because the bull is young and still growing, the tire looped around its neck could cause strangulation or be interpreted as a sign of aggression to other animals.

“Elk will be fighting, competing for breeding rights,” Clay said. “So you could imagine as they lock antlers and they tussle that it’s very likely another bull elk could get its antlers caught up in that tire, and then you could lose two bull elk.”

While officials continue to look for the elk, Clay stresses the need to pick up trash and always pick up your belongings when out in the wilderness.

“Wildlife, especially our antlered wildlife, often get caught up in hammocks, volleyball nets, clothing lines, decorative lighting,” said Clay. “So people need to make sure that they’re keeping a watchful eye for hazards that could affect wildlife.”

Click HERE for the video footages of the elk.