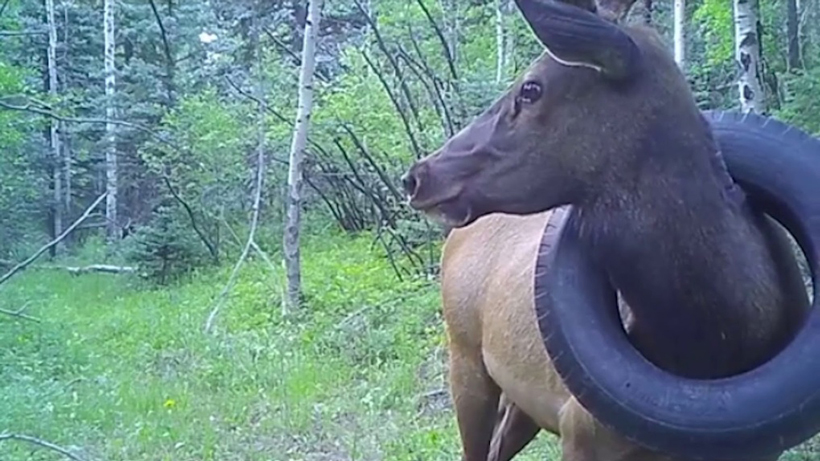 Colorado Parks and Wildlife officers removed the tire from this bull elk’s neck near the town of Pine on Saturday, Oct. 8, 2021. Wildlife officials say the tire had been around the bull’s neck for at least two years. Photo credit: CPW

After a couple years of living life with a tire stuck around its neck, Colorado Parks and Wildlife (CPW) were able to finally tranquilize the bull elk and free it of the object. Last weekend, during CPW’s fourth attempt at capturing the animal, officers were able to cut the animal’s five-point antlers and remove the heavy, old tire, the Denver Post reports.

“It was tight removing it,” said Scott Murdoch. “It was not easy for sure, we had to move it just right to get it off because we weren’t able to cut the steel in the bead of the tire. Fortunately, the bull’s neck still had a little room to move. We would have preferred to cut the tire and leave the antlers for his rutting activity, but the situation was dynamic and we had to just get the tire off in any way possible.”

Swanson responded to the report of the elk by a resident last Saturday. The animal was on private property off of County Road 126 about a mile south of Pine Junction, Colorado. It was mingling with about 40 other elk at the time. Once tranquilized, Murdoch and Swanson got to work, removing the tire and examining the elk, which appeared to be roughly 4 1/2 years old and about 600 pounds. Overall, it appeared healthy despite carrying the extra weight around its neck, according to the Denver Post.

“The hair was rubbed off a little bit, there was one small open wound maybe the size of a nickel or quarter, but other than that it looked really good,” said Murdoch. “I was actually quite shocked to see how good it looked.”

Fortunately, the actual removal didn’t take that long at all, said Swanson. And the elk, once it woke, likely felt massive relief after carrying the roughly 35 pounds of tire and debris around its neck for so long.

“The tire was full of wet pine needles and dirt,” said Murdoch. “So the pine needles, dirt and other debris basically filled the entire bottom half of the tire. There was probably 10 pounds of debris in the tire.”

Here's a video of the bull elk walking around with the tire on his neck. Watch it here.