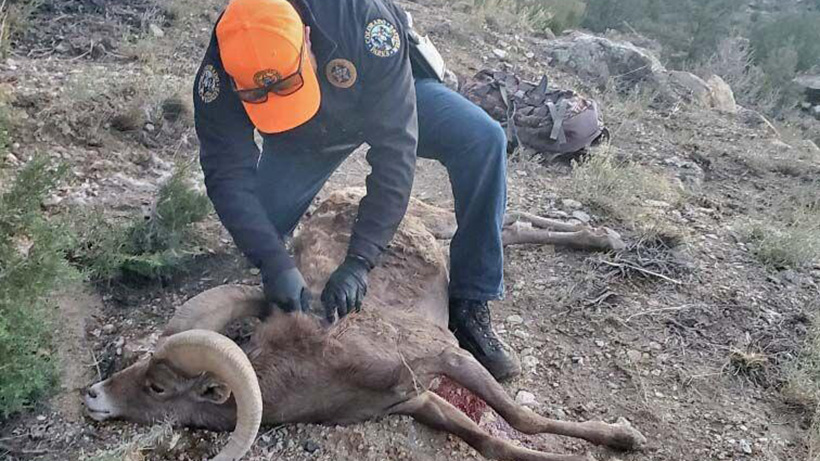 On Monday, Colorado Parks and Wildlife (CPW) was notified by a rock climber that a desert bighorn sheep was dead. The animal had been illegally shot and left between mile markers 147 and 148 off of State Highway 141 between Grand Junction and Gateway in Colorado, according to The Daily Sentinel.

CPW officers discovered a rifle bullet still lodged behind the front shoulder of the ram and determined that it had been killed at least 24 hours prior to the rock climber’s discovery. Desert bighorn sheep season is currently closed and officers are investigating this active poaching incident.

“The ram was shot and left there with nothing removed from it,” said CPW wildlife officer Kevin Duckett. “There is a desert bighorn sheep hunting season in that unit, but it does not start until Nov. 1, and this ram was killed out of season and left to rot.”

According to Duckett, because it is illegal to kill a bighorn sheep with horns “over half-curl” and the dead ram had a 5/8 to 3/4 curl of its horns, if caught, the poacher could be fined over $25,000.

If you have any information regarding this crime, contact Duckett at 970-275-3556 or kevin.duckett@state.co.us. You can also phone in your information anonymously via Operation Game Thief at 877-265-6648 or email them at game.thief@state.co.us.

“Desert bighorn sheep are pretty limited, and CPW offers very limited opportunities for hunting these sheep,” said Duckett. “This act of poaching takes away from sportspersons.”