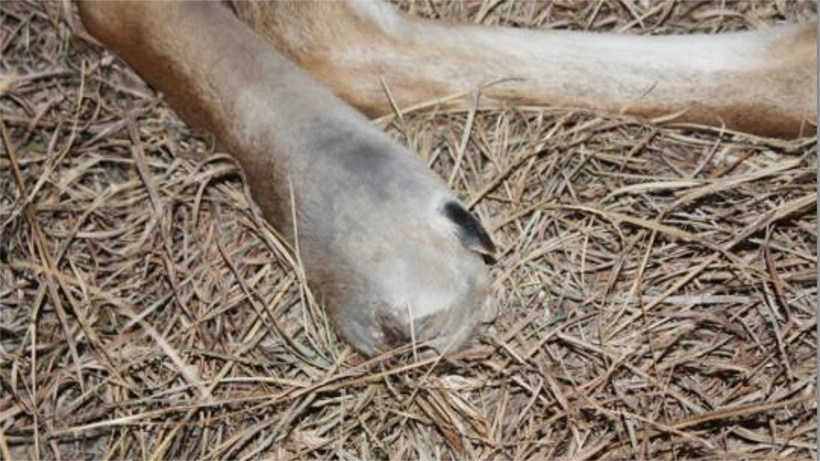 If you spot a deer limping across the fields in Kansas, you should report it. Over the past few weeks, there has been an increase in reports of foot rot within deer statewide though no one seems to know why. The state is currently waiting for lab results to understand what’s behind the uptick in disease. Until the results are in, the Kansas Department of Wildlife, Parks and Tourism (KDWPT) is trying to keep track of how the disease is spreading.

“It is new to me this year and has always been said to be a rarity, but it does not appear to be rare this year in Kansas,” Tim Donges, president of the Quality Deer Management Association’s (QDMA) Bluestem branch, told The Topeka-Capital Journal.

Donges’s 200-acre farm, which, he says is home to about 20% of the bucks in his area, has been hit hard by the disease. QDMA has joined forces with KDWPT to figure out how widespread this is and how it might be stopped. Counties that have reported cases of foot rot include Butler, Lyon, Woodson, Neosho, Phillips, Cowley, Wilson, Bourbon, Anderson, Geary, Dickinson, Elk, Osage and Decatur, according to The Topeka-Capital Journal.

“We see cases every year like this, but this year seems to be a worse year for hoof disease,” Shane Hesting, KDWPT wildlife disease coordinator, told The Topeka-Capital Journal. “This could simply mean that other years could have been as equally bad but most cases went unreported.”

Hesting says that state has sent samples of infected legs to the University of Georgia’s College of Veterinary Medicine’s Southeastern Cooperative Wildlife Disease Study, adding that “so far, we have sent hoof samples from Butler, Lyon, and Woodson counties.”

Foot rot can be linked to hemorrhagic disease or a variety of different types of bacteria that can invade the foot if a deer has an open wound.  While the meat could be considered safe for human consumption should you harvest a deer with foot rot, wildlife officials suggest that it would be best to contact KDWPT first for proper safeguards in handling the infected animal.